A Slice of Sunny Spain

The salad in this post is featured on http://www.ameessavorydish.com/2012/09/fit-and-fabulous-fridays-48.html﻿

Earlier this month,  Allison invited her friend Pablo,an exchange student from Spain to stay with us for a few days.  The semester was over and Pablo's plane ticket wasn't until the next Monday, so Allison thought he might enjoy seeing what average American family life was like.  Of course we were all charmed by him and even Vanilla gave Pablo his heart!  It was so interesting to hear from him about Spanish eating habits.  We learned that breakfast in Spain was almost nothing - just a cup of coffee and maybe a piece of toast at most.  Lunch, the main meal, is no earlier than 1:30.  Dinner is served at 9:00, but can often be even later.  Pablo, however, was very gracious and fit right into our three square meals a day schedule.  While he was staying with us, I didn't attempt to serve him anything "Spanish" - I knew I would fall far short of the real thing! Although after he left, I couldn't resist cooking up some "Spanish" dishes our family has enjoyed in the past.  The olive recipe is fabulous as part of a tapas spread and just delicious with some warm, crusty bread to soak up the olive marinade sauce.  The salad is a bright and light side dish that would compliment any meat, but goes especially well with the chicken recipe given below.
Marinated Olives - Refrigerated, this will keep for a week - serve at room temperature
1 can whole pitted black olives, drained and rinsed
1 small jar Spanish style green olives, drained
2 cloves of garlic, put through a press
2 teaspoons dried rosemary
½ teaspoon ground coriander
½ teaspoon thyme
1/8 teaspoon of salt
1/8 teaspoon black pepper
¼ cup sherry vinegar
½ cup olive oil 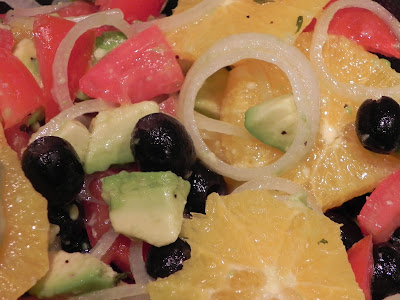 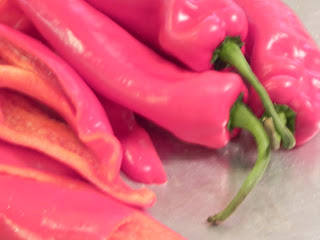