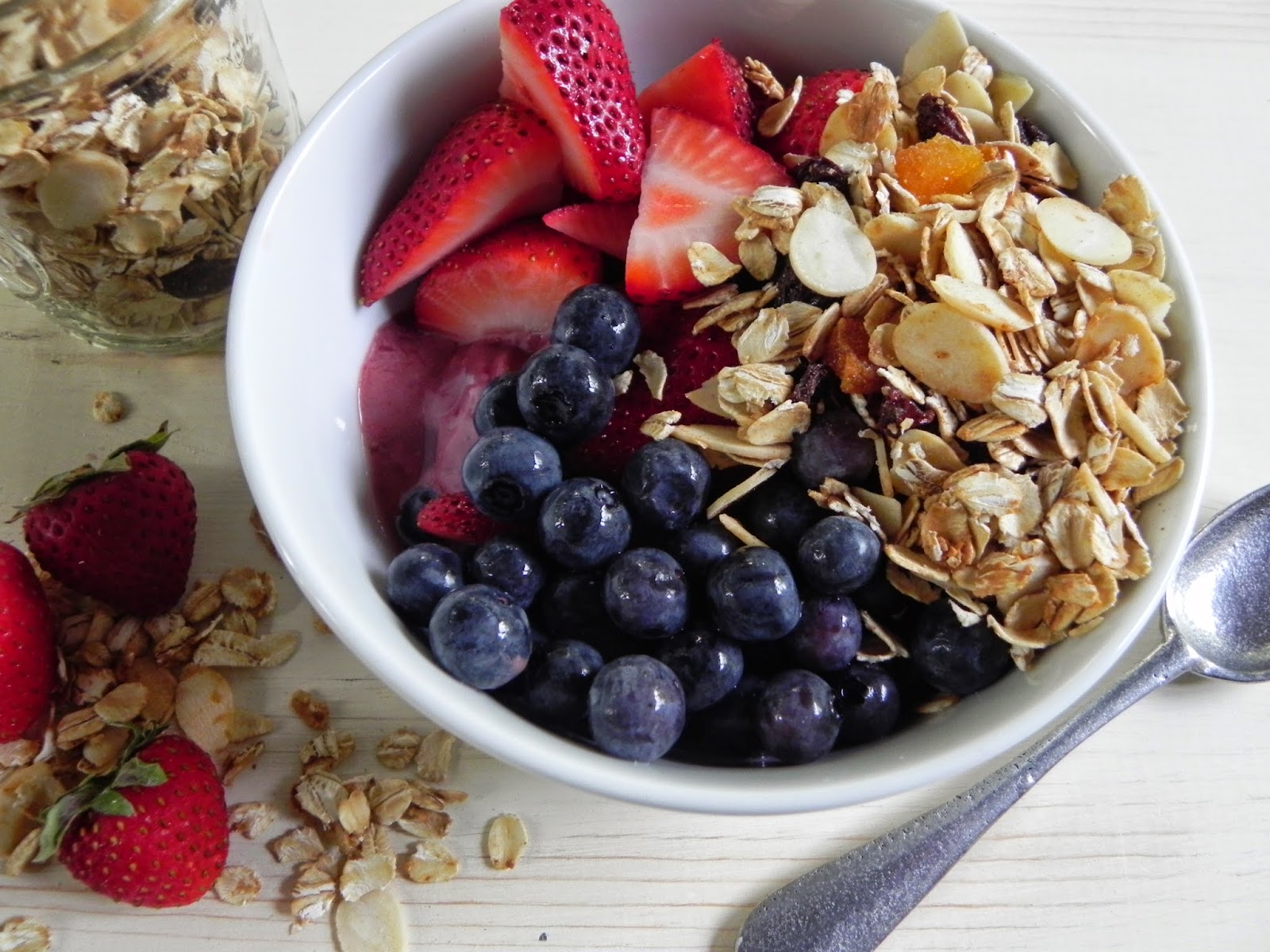 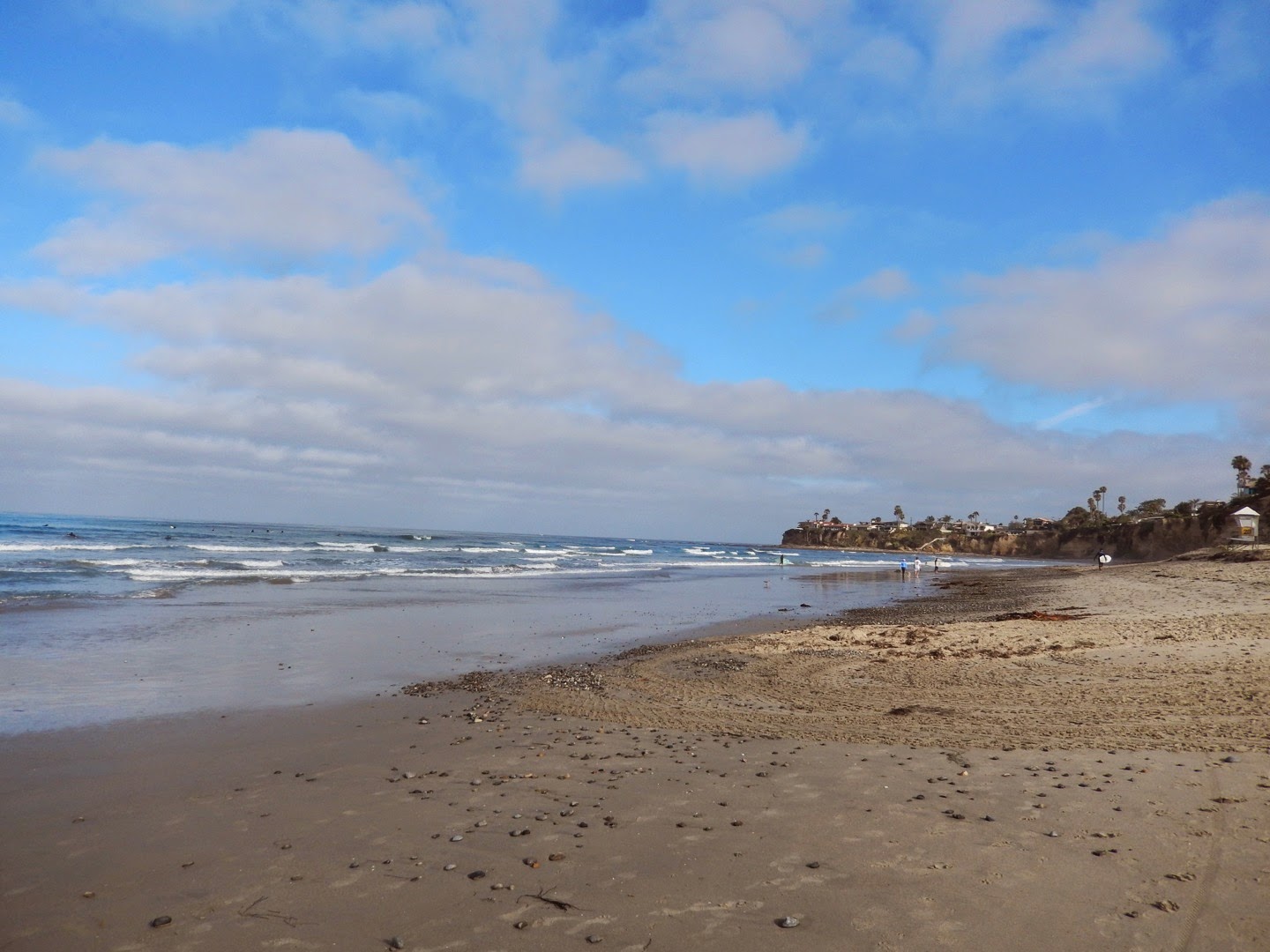 Last June, I went out to Southern California to help Jenn move.  I love it out there and I was thrilled to have an excuse to go! The move went smoothly and we were able to do a couple fun things as well as load and haul boxes.  One morning we got up early and took a walk along the beach before Jenn had to go to work. It is only three blocks from her place and even at that time, there were people surfing, jogging, and just out enjoying the beauty of a new day.

We ended up having breakfast at this cute little cafe just 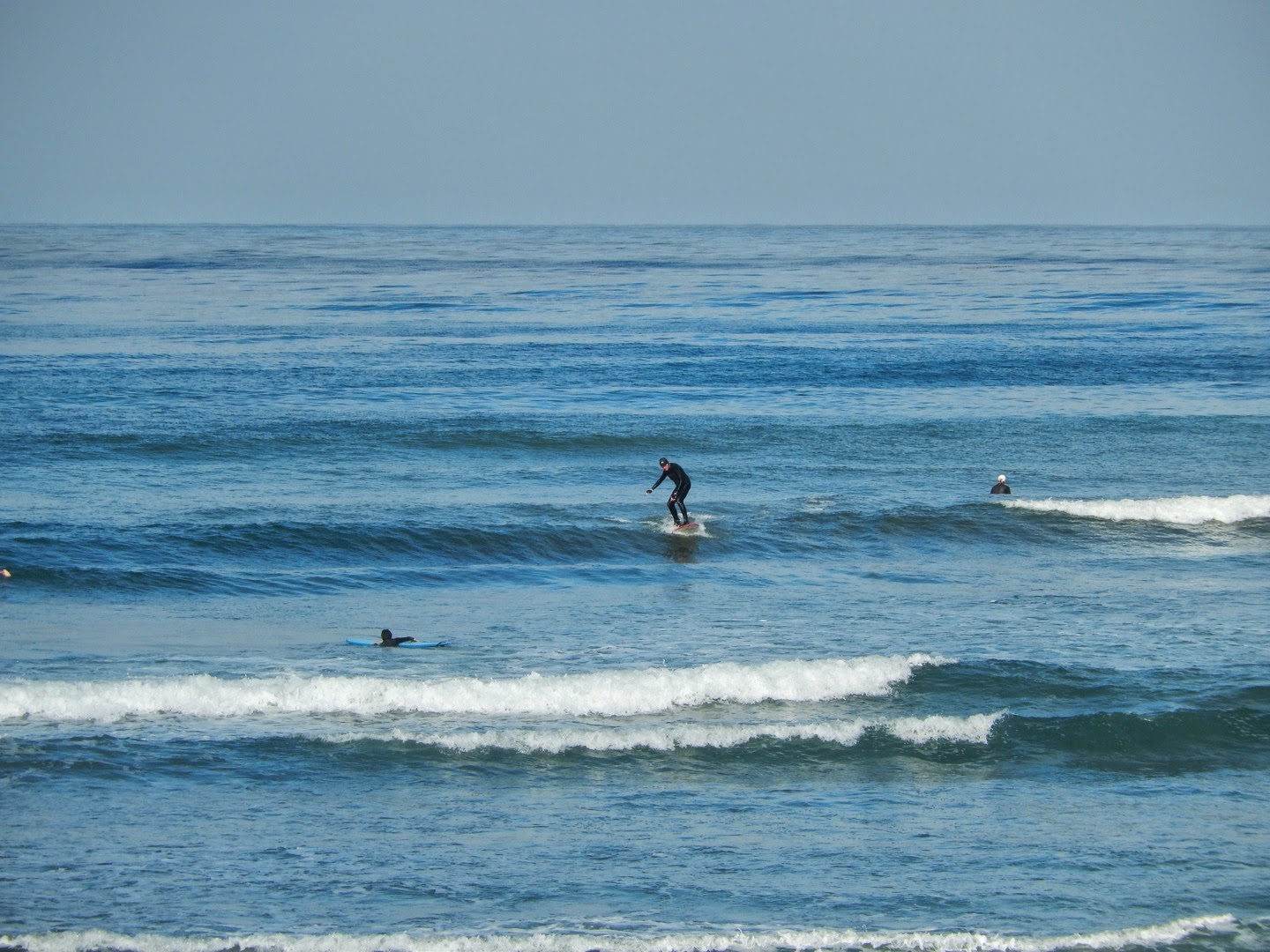 catty corner from her apartment. Inside we were entertained by a couple of Pomeranian dogs an elderly man had brought with him to share his breakfast. (In California people are allowed to bring their dogs into a restaurant!)  Jenn suggested I try an Acai Bowl which is acai berries blended with yogurt and topped with fruit and granola. We sat at a table outside and enjoyed the cold refreshing acai puree with yummy stuff piled on top of it. It had to be eaten with a spoon, because it has a thicker consistency than a smoothie - almost like sorbet.

After I got back home and was dealing with the sticky

humid heat of the midwest, I found myself dreaming of an acai bowl for breakfast.  I searched around and found frozen acai berries meant for smoothies at Whole Foods. They come in 3.5 ounce packets in a package of four.  The trick was to get the acai to the right consistency so it could stand up to the additional stuff.  I messed around a bit and found that to be successful, I had to use either a frozen banana or some kind of frozen berries such blueberries, raspberries, or a mixture.  I also experimented with making granola; I wanted to come up with something half way healthy. I posted what I've been using here -a mixture of oats, dried fruit, and nuts with no oil and blue agave syrup or honey to sweeten it.  I confess that I've had this for breakfast 12 times in the last month!

Steps to Make an Acai Bowl and Granola 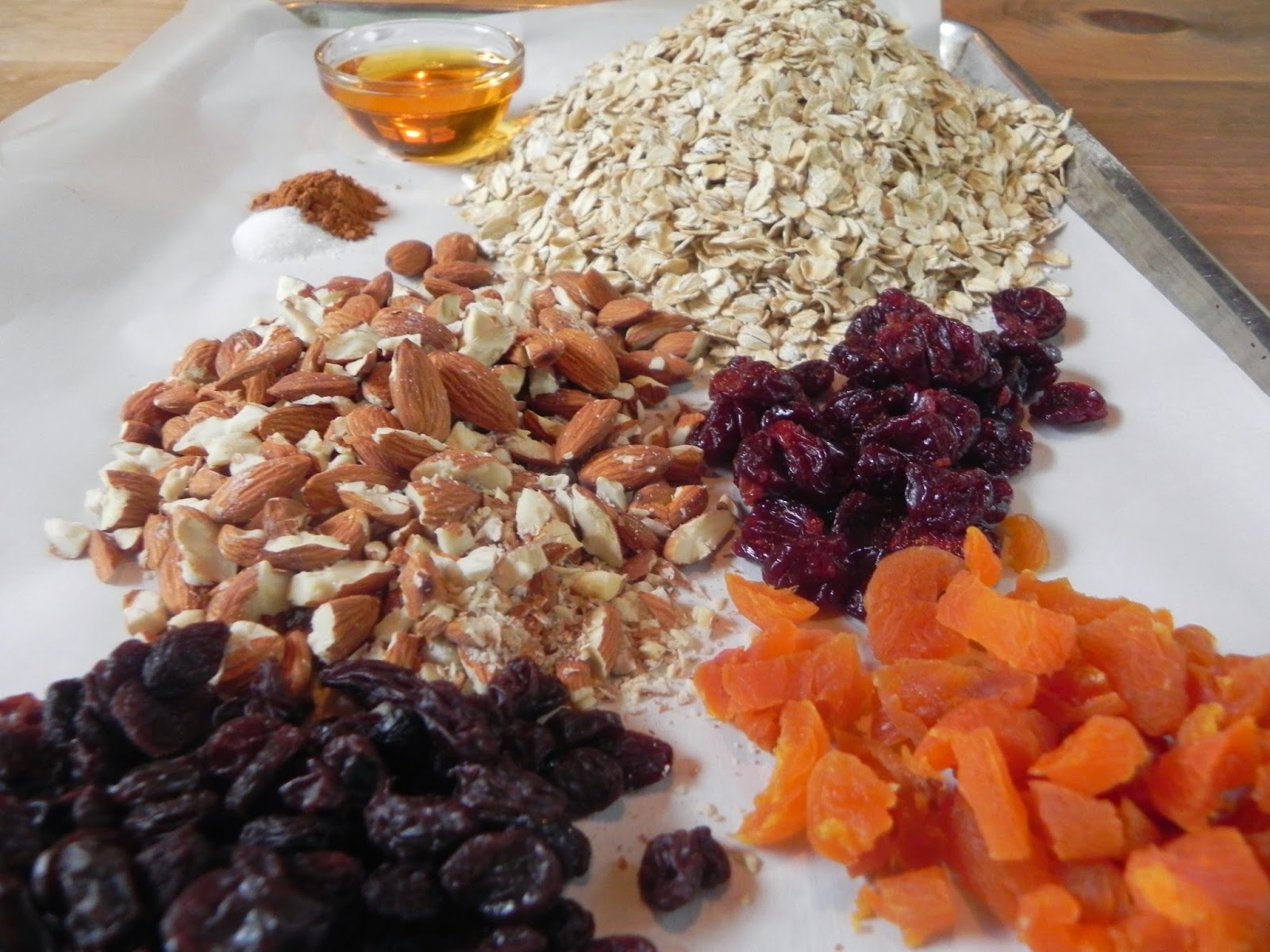 Preheat the oven to 350 degrees. Line a baking sheet with parchment paper or aluminum foil.
Either in a large bowl or directly on the baking sheet, mix the following ingredients.

Spread the mixture evenly on the baking sheet and bake for 15 minutes, stirring twice at 5 minutes and 10 minutes. The granola should be starting to turn golden brown.

While the granola cools down make the acai blend. 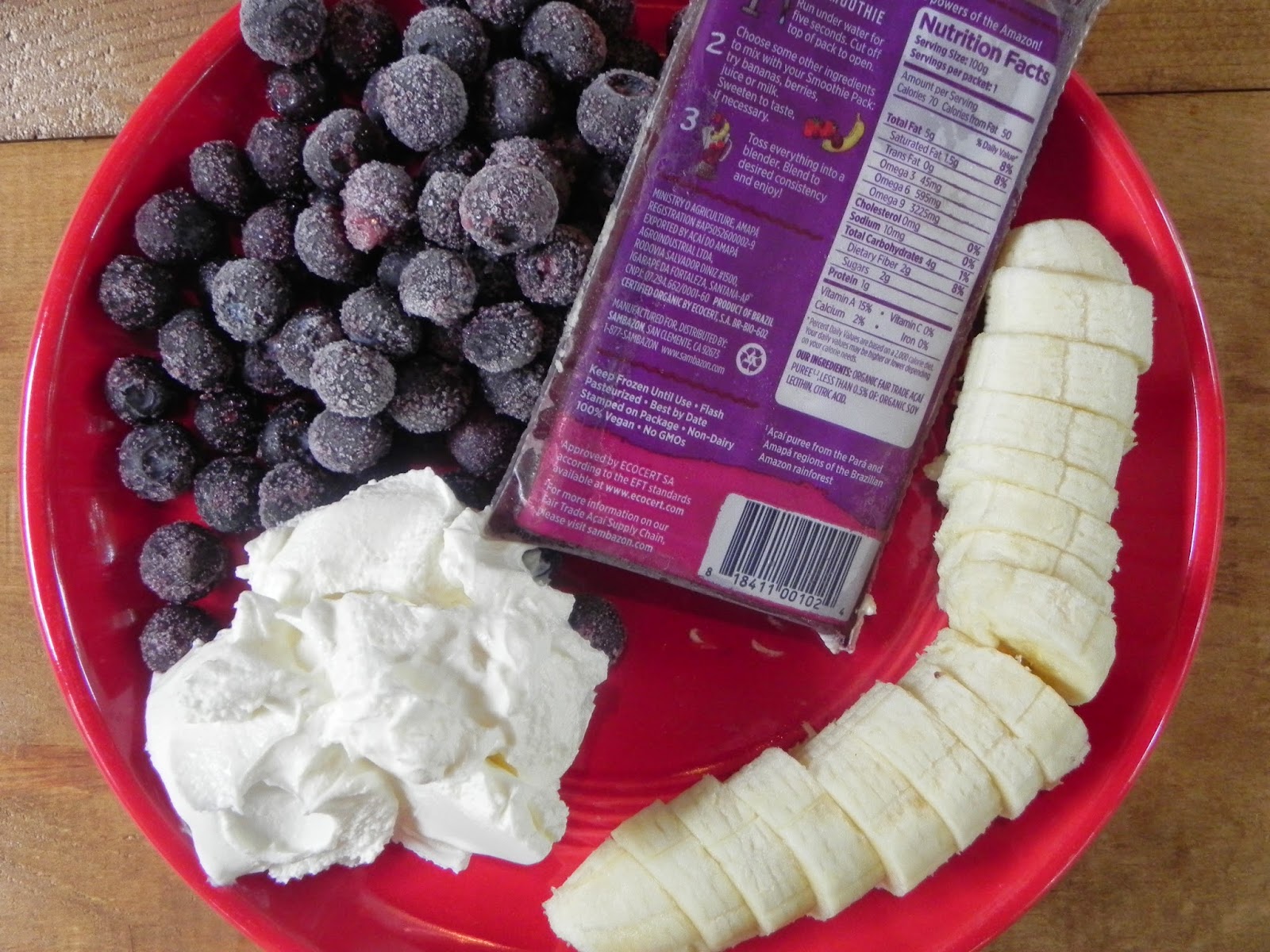 Put the following ingredients in a blender and process until it has the consistency of sorbet.

The blender may have to be stopped and the mixture might have to be stirred a few times to get it all blended.  The idea is to have it thick, but mixed through out. 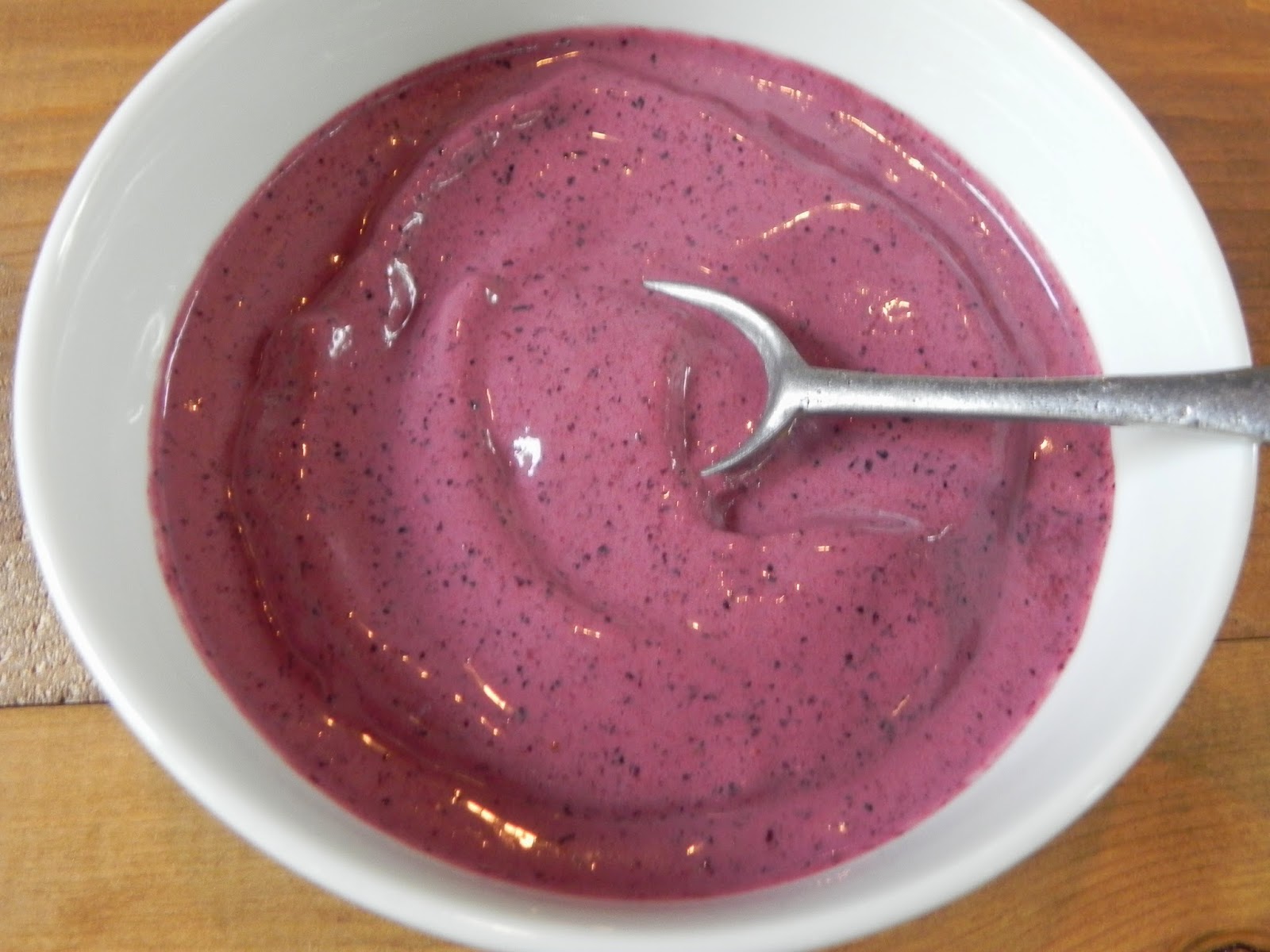 Top with the granola, fresh berries and/or banana slices. A drizzle of honey is nice as well. Yum! 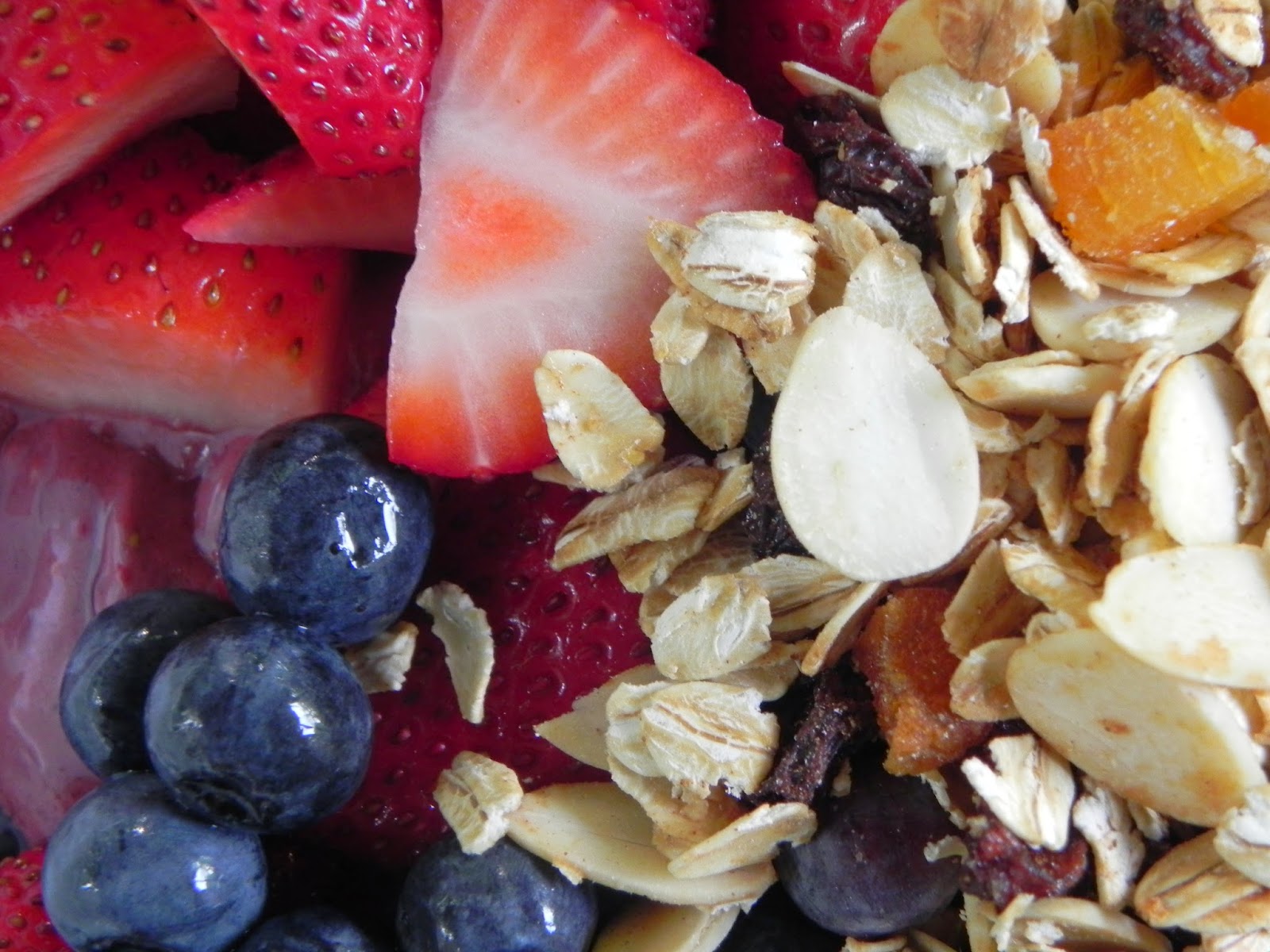 Posted by Julie Yates at 5:38 PM No comments:

It's Another Meatball Thing - An Easy Appetizer 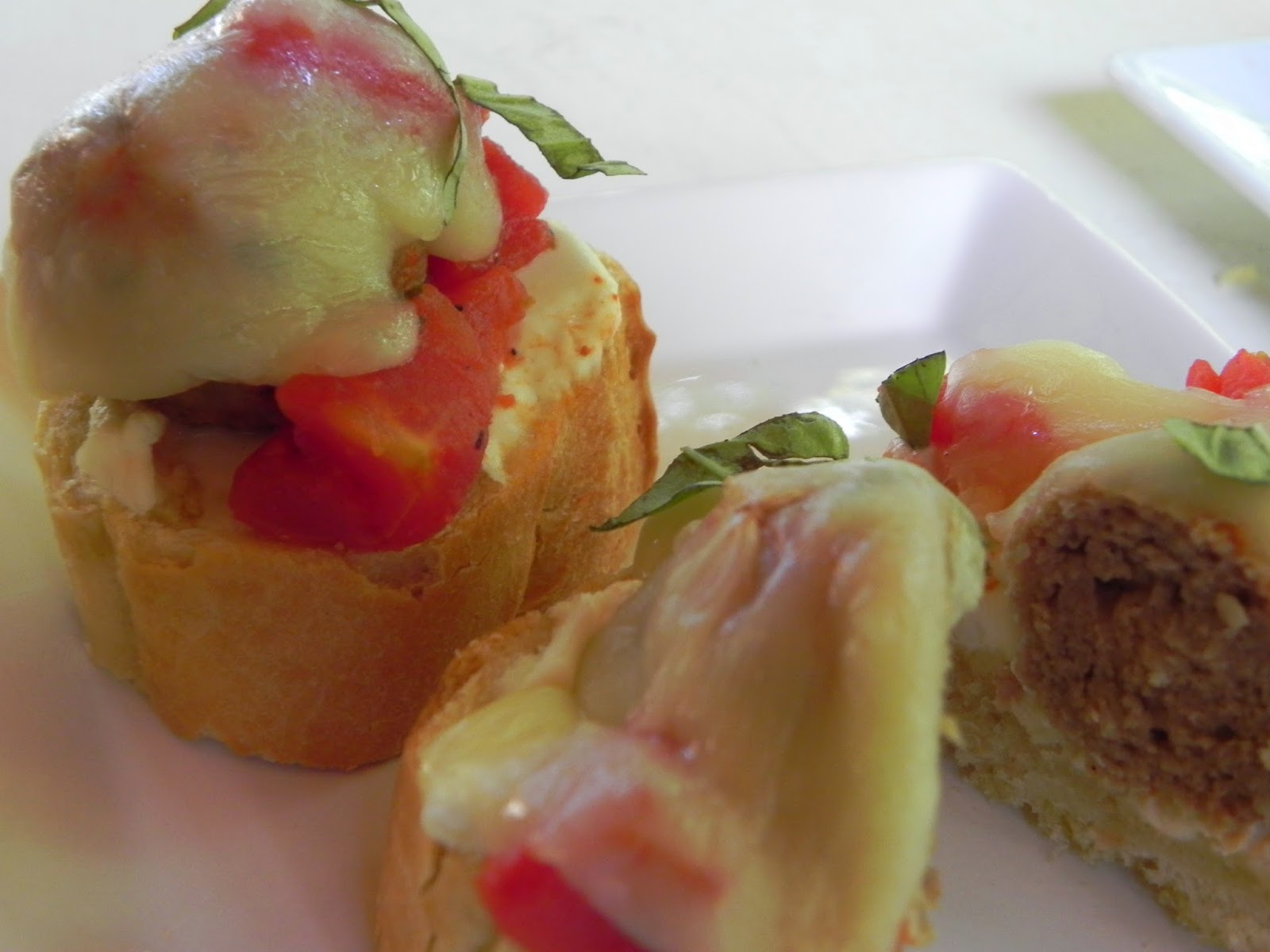 I don't know why the girls like meatballs so much - but they do! And I do too, although I always try to skip the extra carbs in pasta. However, one thing I have a hard time turning down is a toasted meatball sub. There is nothing like biting into warm crusty bread and then into a meatball covered in a great tomato sauce and melted cheese.  What a reward for saving leftover meatballs for lunch instead of on their own in a midnight snack! The appetizer featured here is a variation of a sub; I took the idea from the small plates menu of a restaurant that called them "Meatball Sliders". Because of our family's love for meatballs, we don't have just one recipe we like but several.  Click Here for a link to a post with traditional, Spanish, or Mediterranean varieties or Click Here to link up to a summer time recipe where the sauce is made from fresh tomatoes and, if desired, the meatballs can be grilled.  Whatever type of meatball made, the recipe posted here is yummy for the left overs. Or - just buy pre-made frozen ones and a jar of sauce for instant appetizers.


Here's What You Need For a Dozen Meatball Appetizers 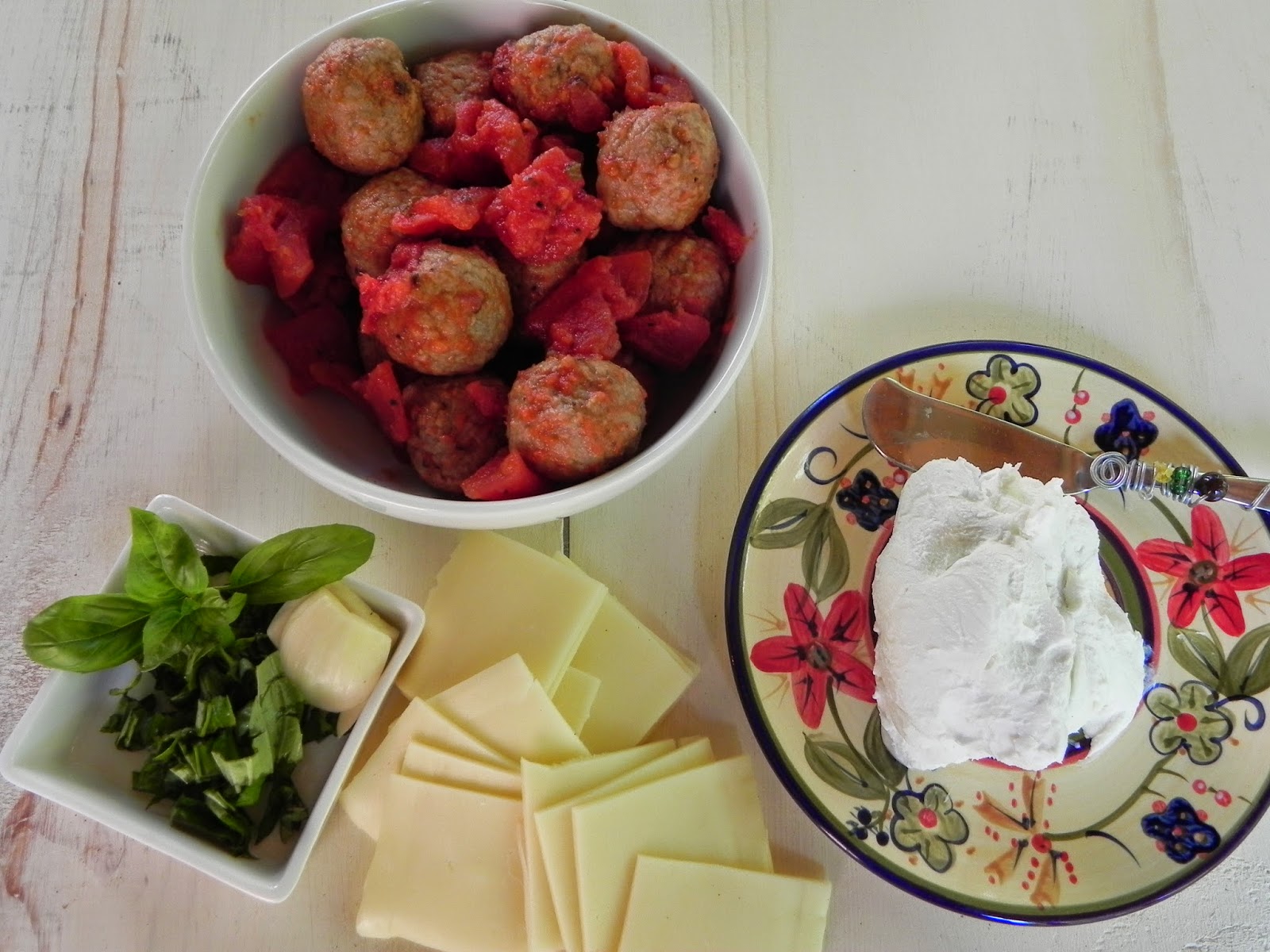 Directions for Assembling the Meatball Appetizers 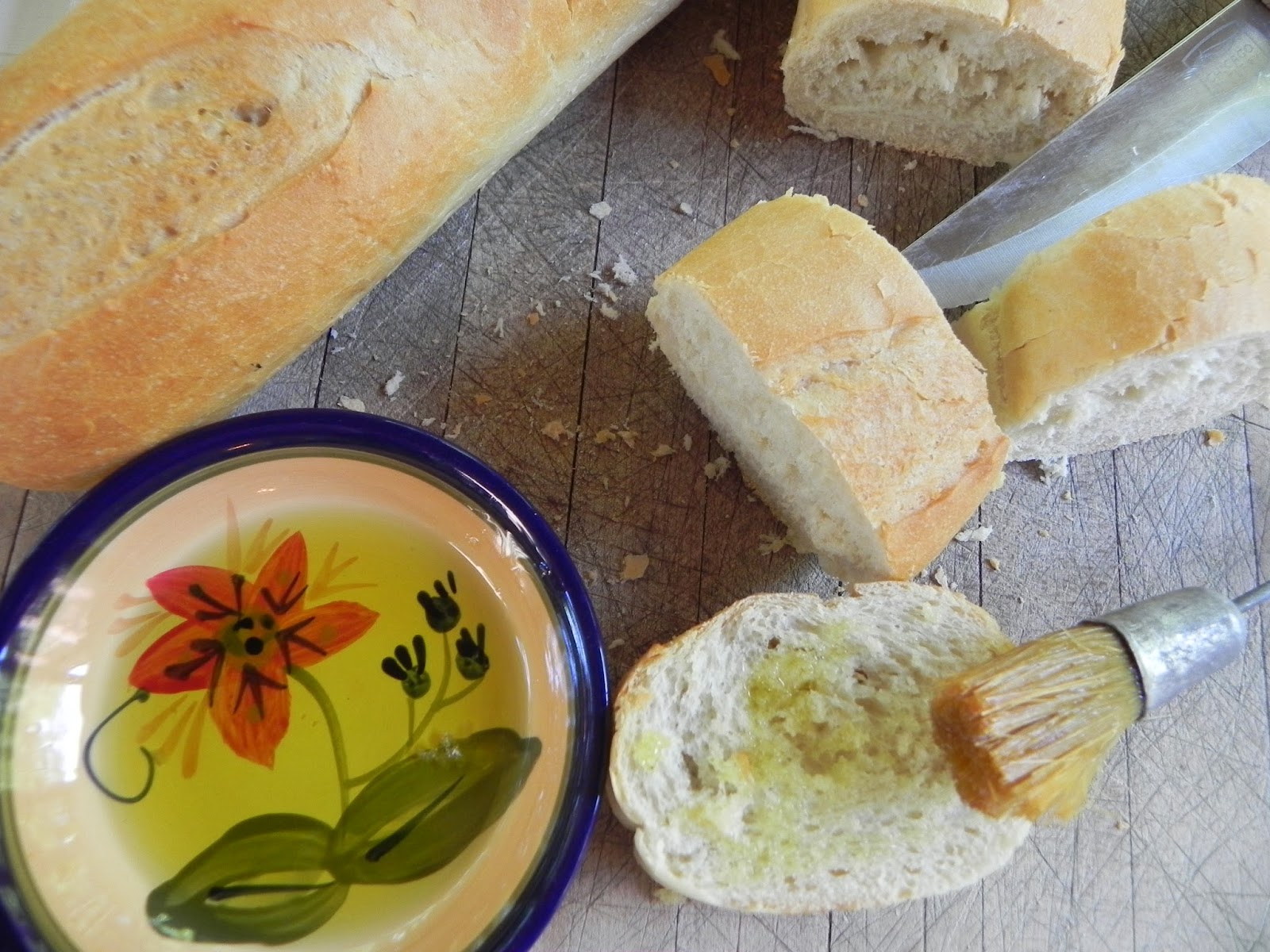 Cut the bread into 12 slices, each about 1 inch thick. Lightly brush one side of each slice with olive oil. Place on a foil lined baking sheet. 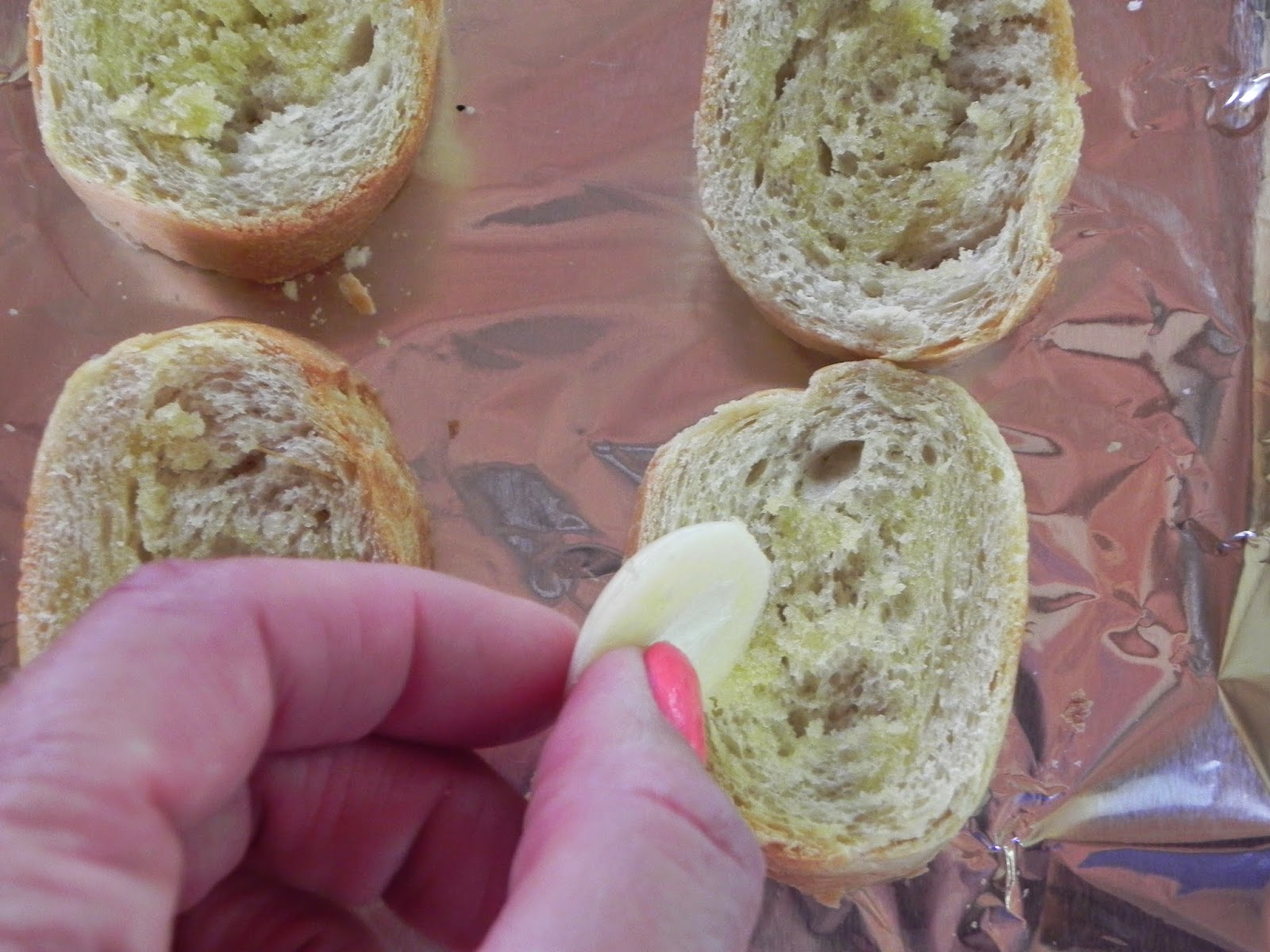 Bake in a 350 degree oven  for about 12 minutes or until the bread the bread is just starting to brown.  Take it out of the oven and gently rub the top of each piece with the peeled garlic glove. 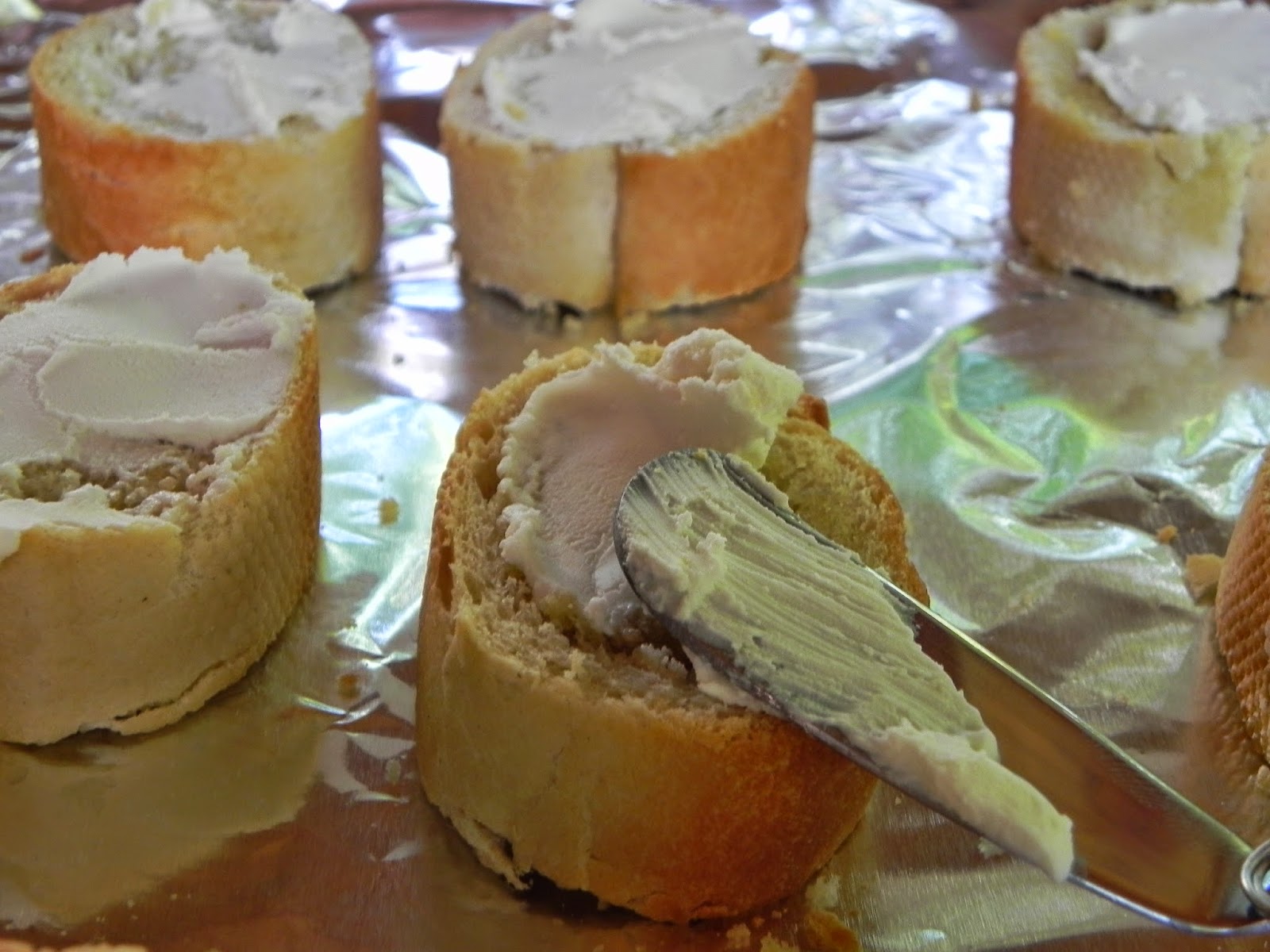 Now spread about a teaspoon of goat cheese on each toasted and garlic rubbed bread slice. 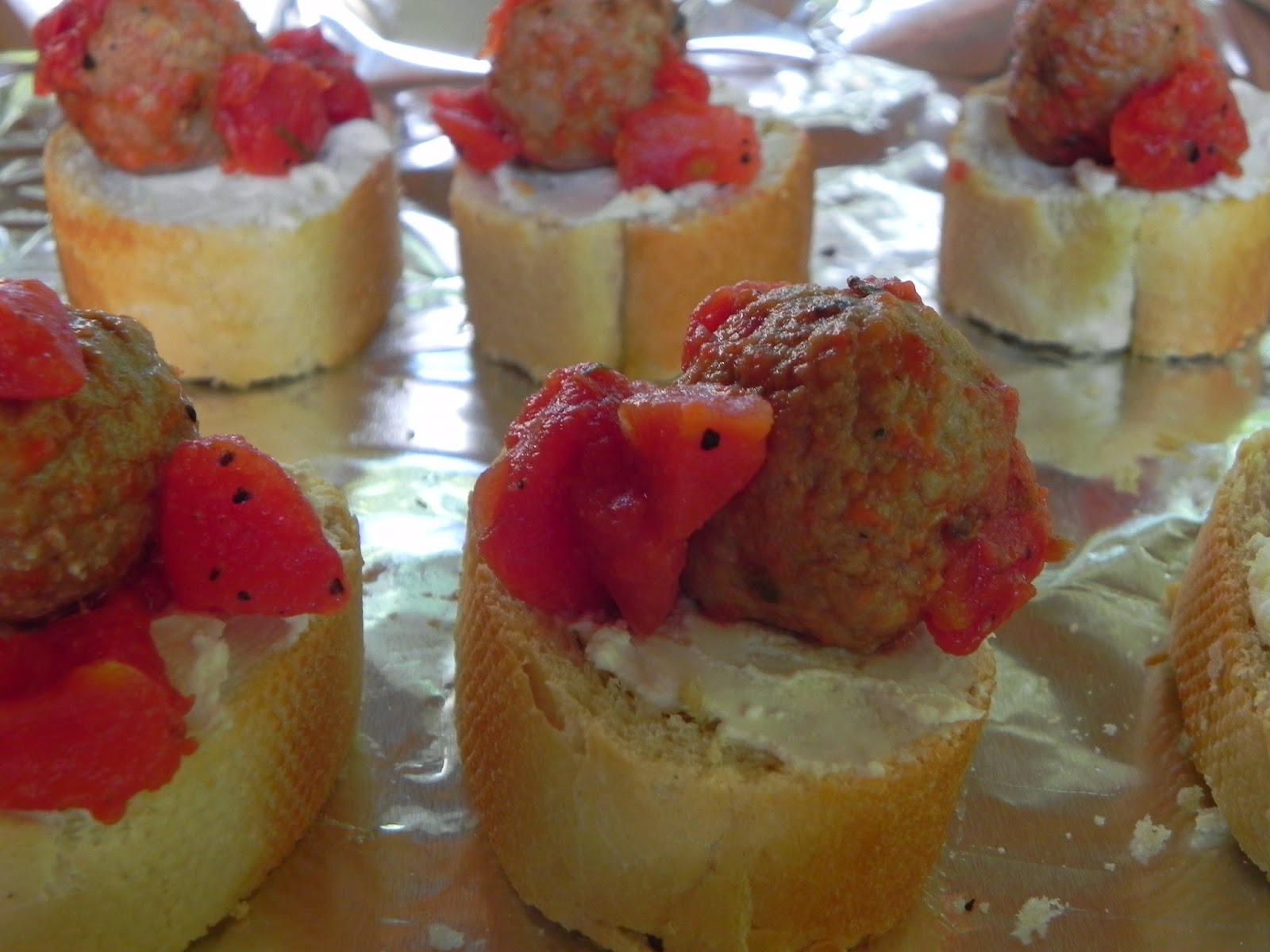 Top each bread slice with a meatball and some sauce. 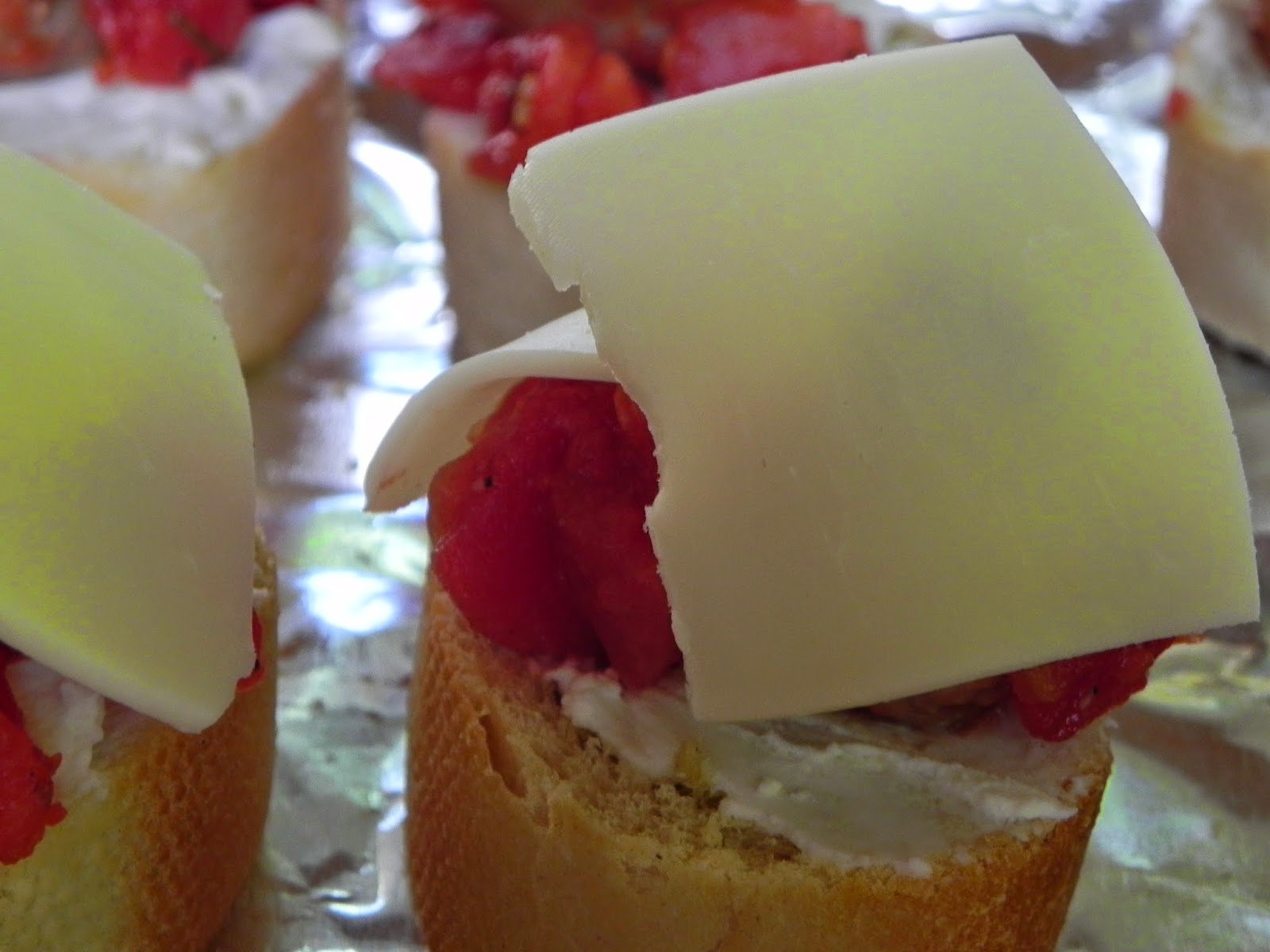 Cut each "sandwich sized" cheese slice into four equal squares and place two squares on top of each slice. 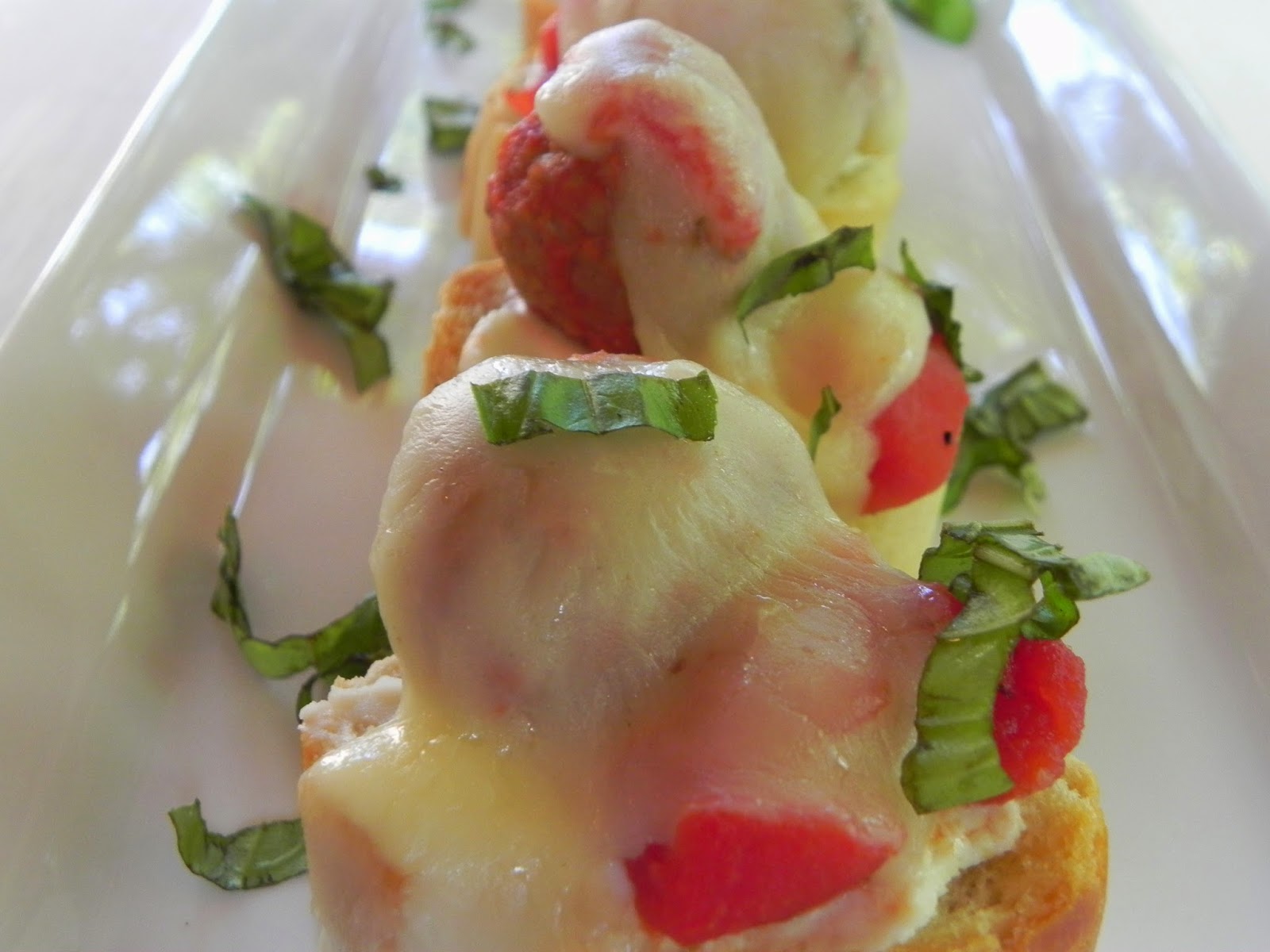 Place the cheese covered slices back into the 350 degree oven and bake for about 10 minutes or until the mozerella cheese is nice and melted and the edges of the bread look golden brown. Yum!

Posted by Julie Yates at 6:17 AM No comments:

Meatballs for the Summertime 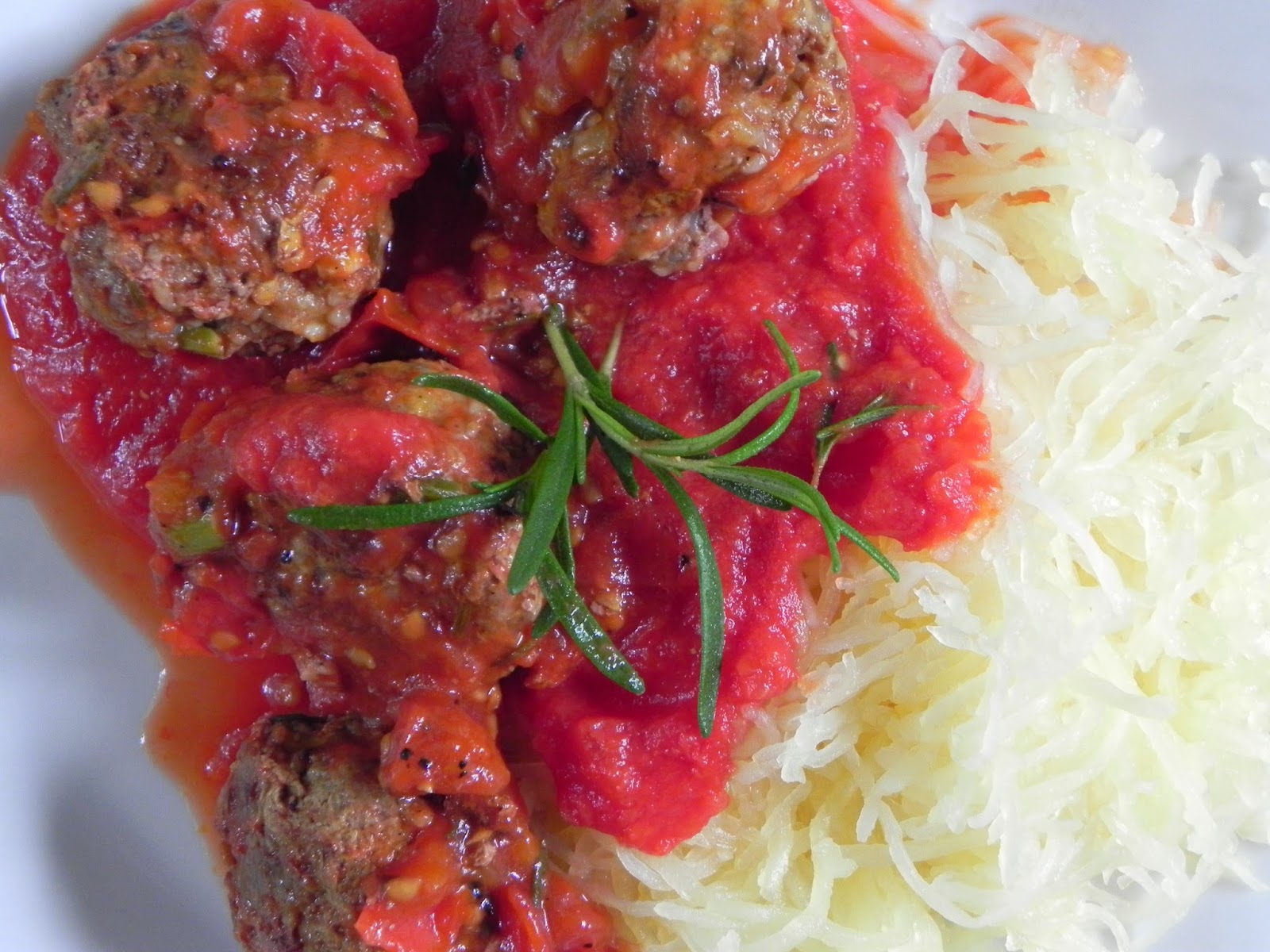 The other day, even though it was hot and muggy, I found myself craving meatballs.  I usually think of meatballs as a cold weather comfort type food, so I changed one of my favorite recipes up a bit to make it leaner, lighter, and more of a warm weather dish.  I used the Spanish style meatballs from an earlier blog post, grilled them, and served sauce and all on top of spaghetti squash instead of pasta. No wheat involved since the meatball mix doesn't contain bread crumbs but is held together with an egg and some Parmesan cheese.  I packed up the meatballs, sauce, and spaghetti squash and took it down to Allison's.  She is still teaching exercise classes for the university over the summer, and after being a participant in two of her classes - she and I were ready for those meatballs! They really hit the spot, her roommates loved them as well, and I didn't feel like I had undone all my workout efforts by consuming a ton of calories.  Click here for three more meatball recipes, and go ahead and serve them with pasta if the weather turns ugly! 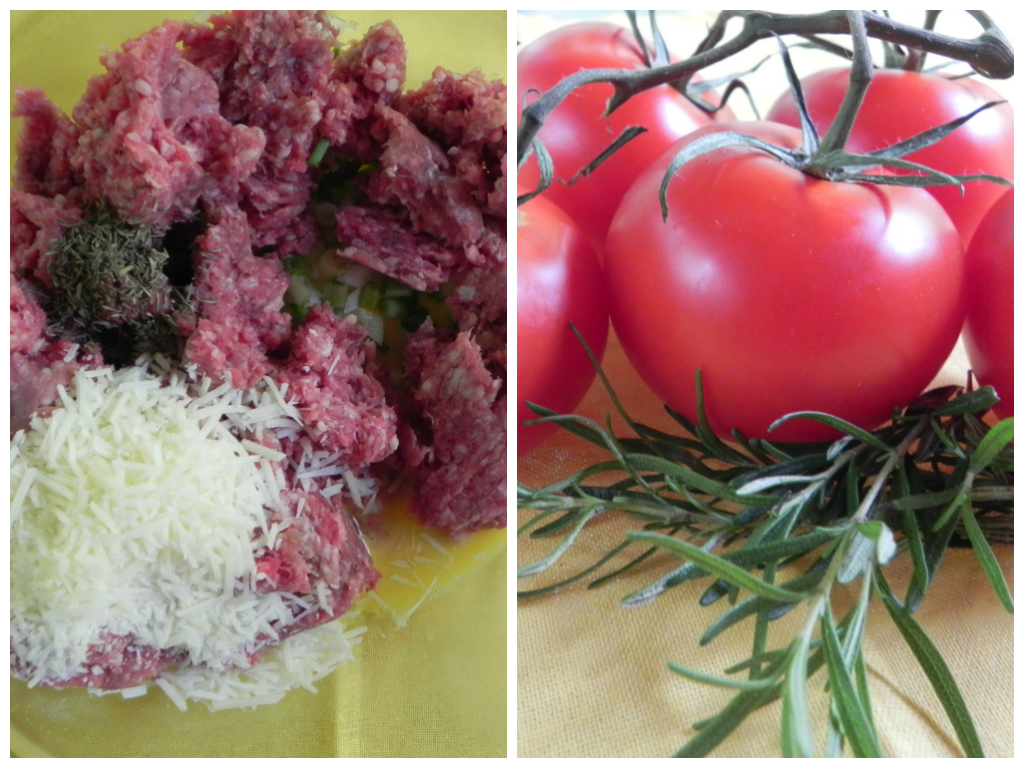 Since the squash takes 45 minutes to bake, start to prepare it first. Cut one large spaghetti squash lengthwise in half. Scoop out the sides and the darker stringy stuff.  Put a couple of inches of water into a baking dish and place the squash halves skin side up into the dish. Bake at 350 degrees for 45 minutes. Remove from oven.  With a fork, remove the strands of squash from the skin by running the fork from top to bottom of the squash. 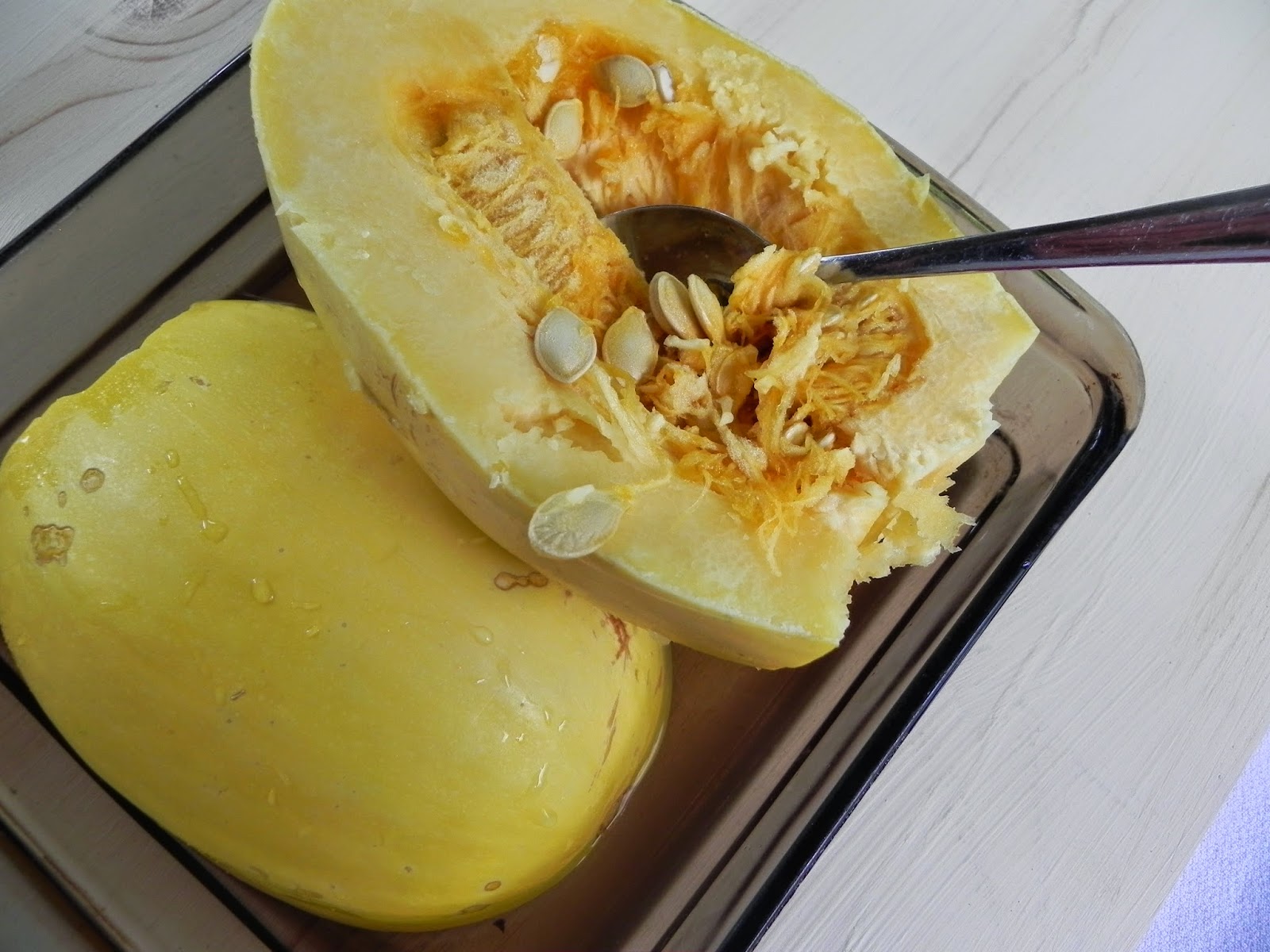 While the squash is baking, dice the tomatoes. Heat the olive oil up in a pan over medium heat. Place the tomatoes, rosemary, wine, salt and pepper in the pan.  Turn the heat up and bring it up to a boil.  Turn the heat down to low and allow the mixture to simmer while you assemble and cook the meatballs - at least 15 minutes. 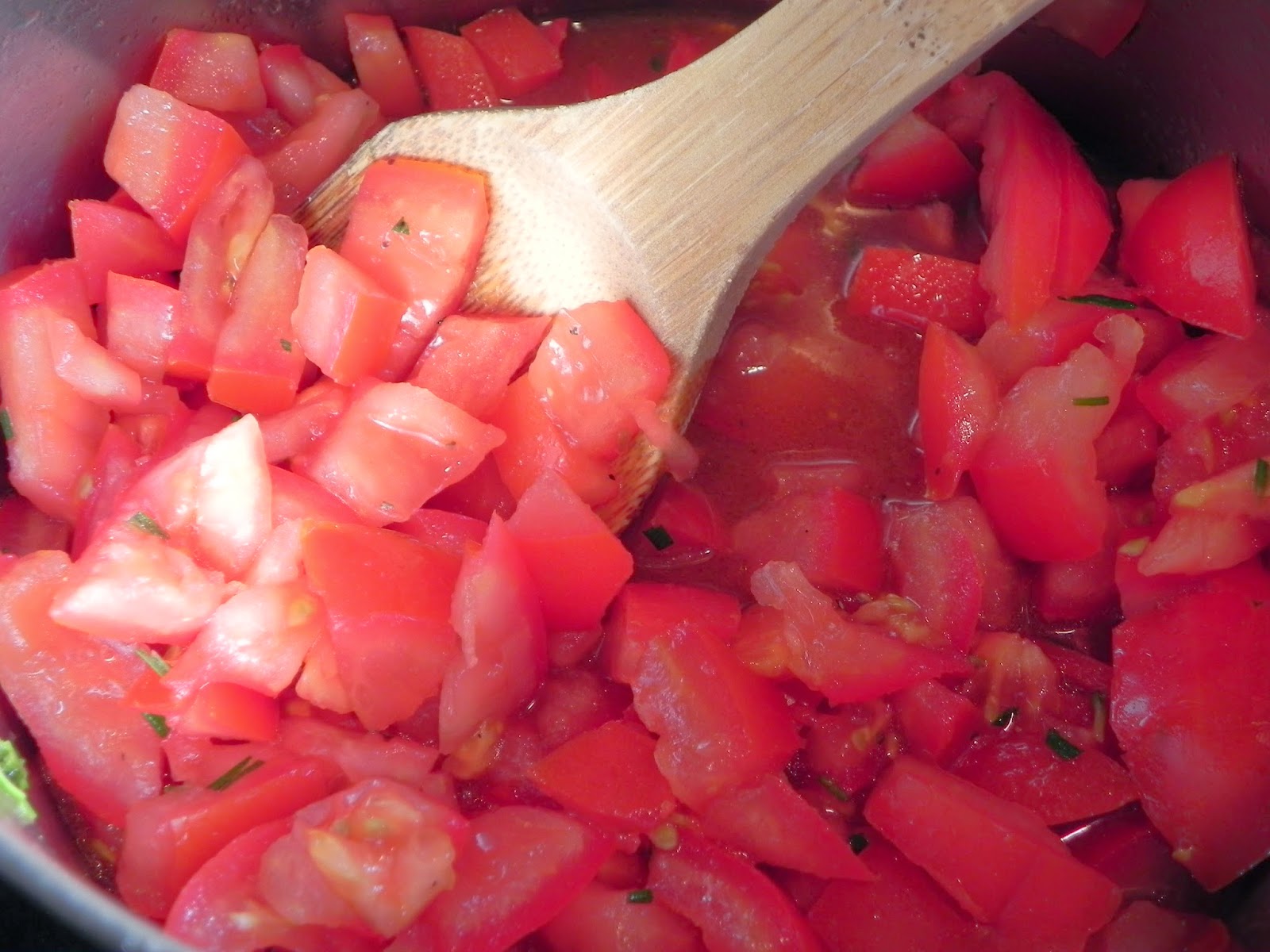 Now whisk the egg up in a large bowl. Add the meat, cheese, green onion, garlic powder, and thyme.  As you are forming the meat mixture into walnut sized balls, tuck an olive into the center of each one. 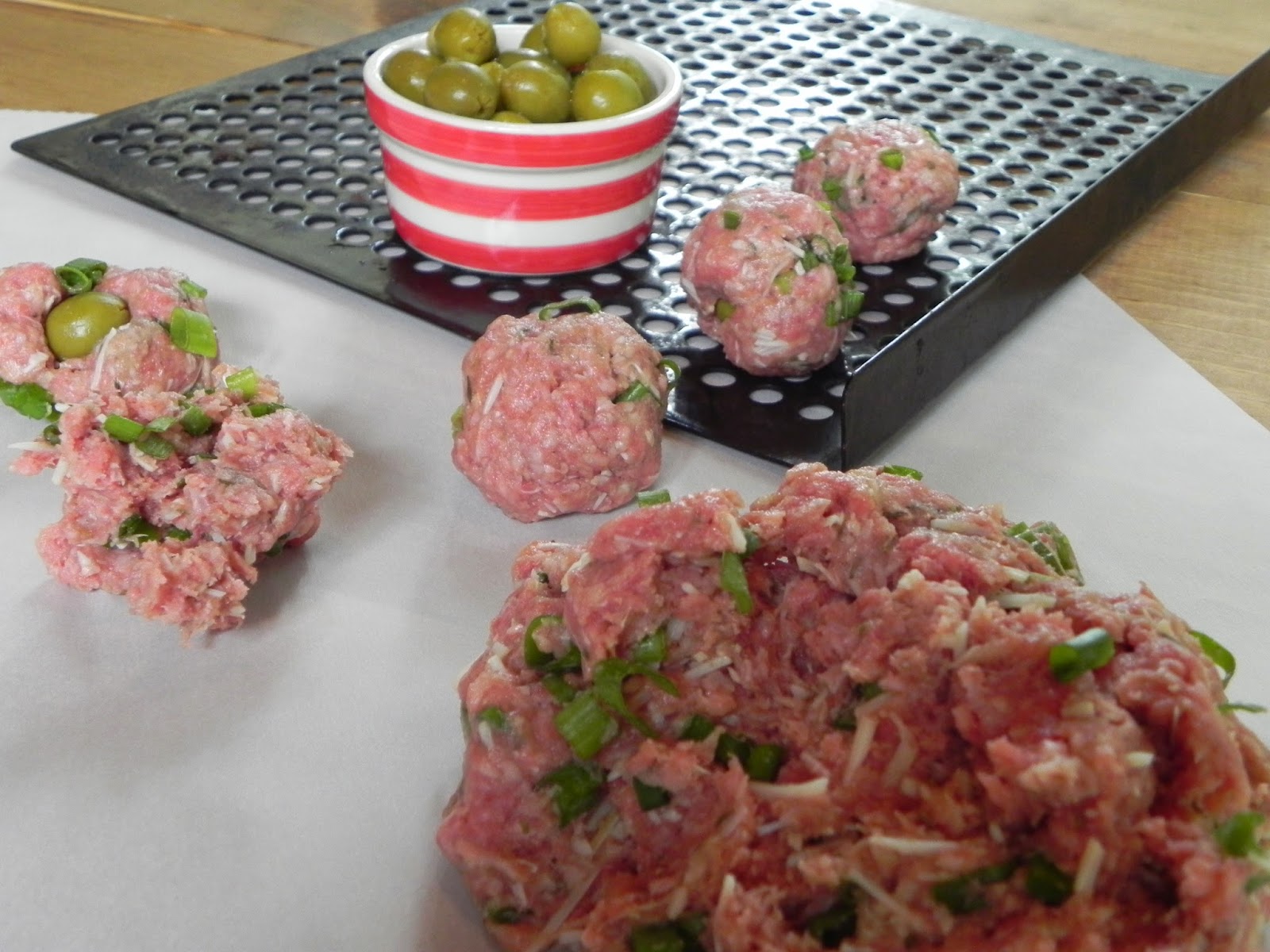 Either bake in a 350 degree oven for 20 minutes, or grill on medium low heat about 5 minutes per side. I use a nice little grill sheet that is meant for small foods so that the meatballs don't fall between the slats of the grill. 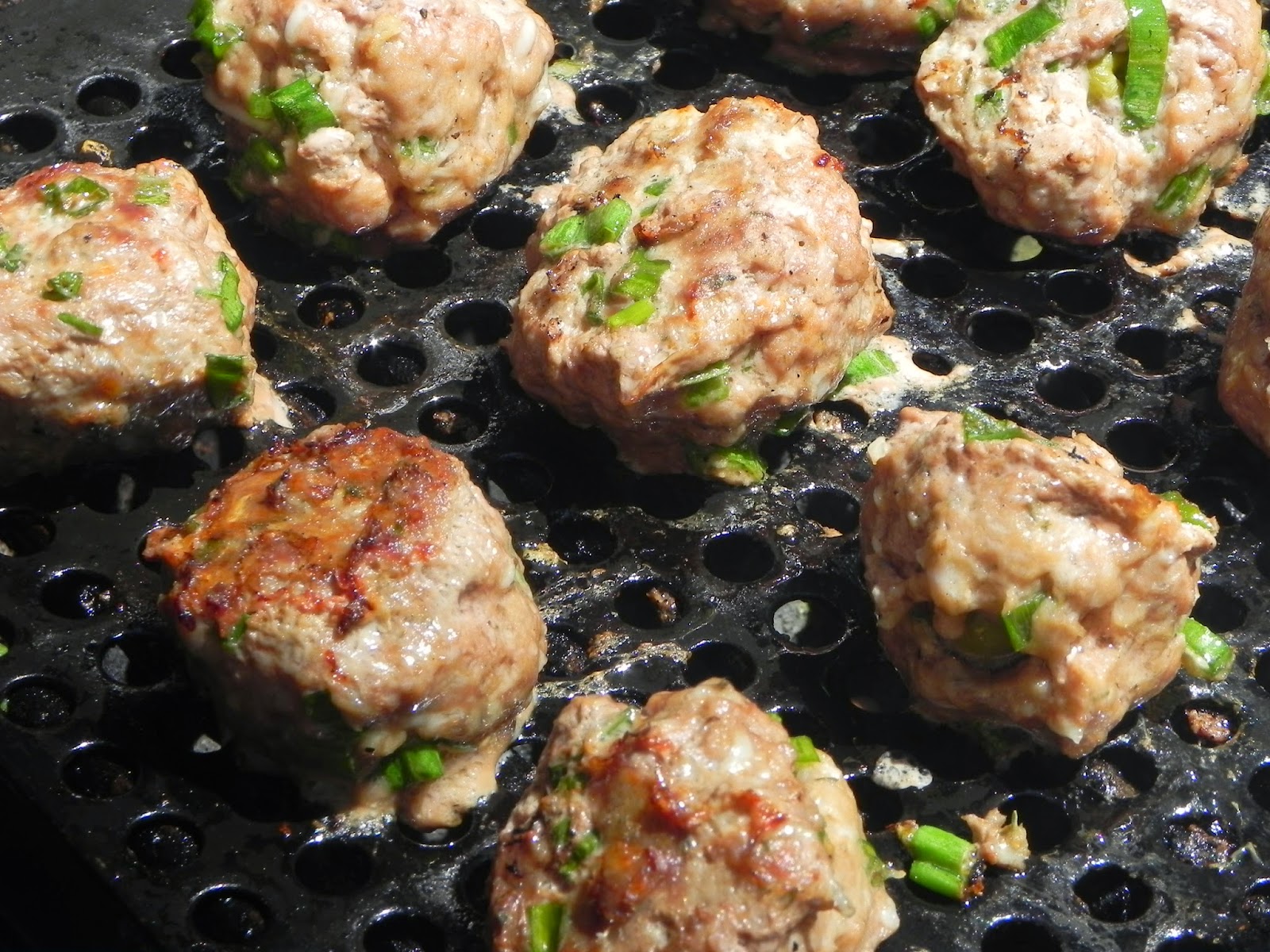 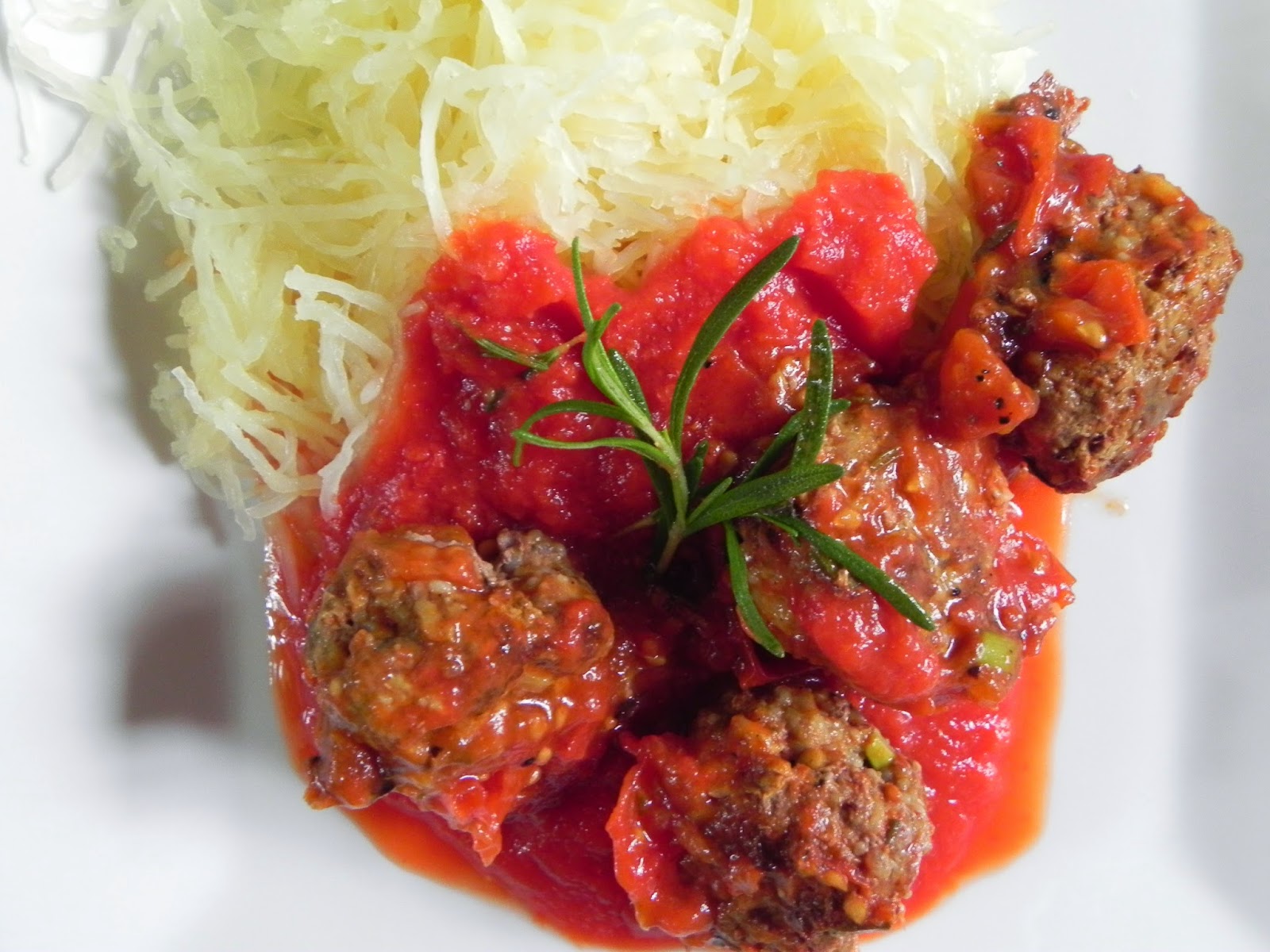