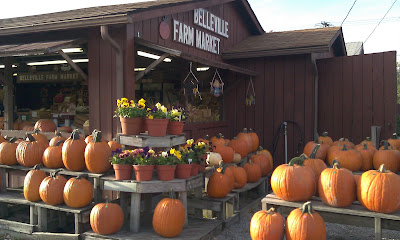 Last week I had to drop something off at Jenn's apartment which is in a little town about a half hour west from where I teach.  It was such a gorgeous day that we decided to drive to a little farmer's market we had passed before, but never took the time to stop at.  The little old couple that worked there were so cute; they told us about the produce they had just received and what farms it had all come from.  I couldn't resist buying a box load of their wares - some I decorated my house with and the rest got made into yummy fall soup!  All five of these soups are super easy.  They call for very few ingredients because sometimes a simple soup made out of a vegetable  is just delicious without a whole lot of extras. The tomato/pepper soup was inspired by a recipe passed onto me by Aunt Gayla.  It called for white bread, ground almonds, and arrow root. Since it sounded like too much work, I pared it down to the directions below.  I found the pumpkin soup in a Libby's advertisement.  Yes, it involves the canned vegetable, but its a whole lot easier than stewing a big old pumpkin on the stove! The broccoli soup came from an old friend who used to live in the hills of Brown County.  When I gave up potatoes for a low carb diet, I hit upon replacing them in everything with cauliflower - including the soup below, and the black bean soup was something I threw together one day that was always a favorite with Caroline. 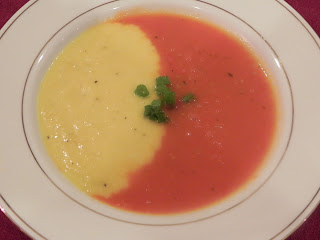 Red Tomato/Yellow Pepper Soup
4 tablespoons of olive oil
1 large onion chopped
2 cloves of garlic, put through press
2 large yellow bell peppers, seeded and chopped
4 large red tomatoes, seeded and chopped
4 cups chicken broth
1/4 teaspoon of ground thyme
1/4 teaspoon dried basil
salt
pepper
Take two separate pans and put 2 tablespoons of the olive oil in each one. Saute 1/2 of the diced onion in each pan until soft. Add one clove of the pressed garlic and saute for 30 seconds. Add the yellow pepper to one pan and the tomato to the other one. Put 2 cups of chicken broth into each pan. Add 1/8 of a teaspoon of salt and 1/4 a teaspoon of pepper to each pan. To the tomatoes add the thyme and the basil. Bring to a boil and turn the heat down. Simmer for 20 minutes uncovered. Then, puree each mixture separately with a blender or food processor. Put each mixture into a pitcher. Serve soup in bowls by slowly pouring the tomatoe mixture from one side and the pepper mixture from the other. Garnish with chopped green onion. 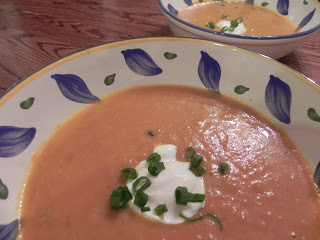 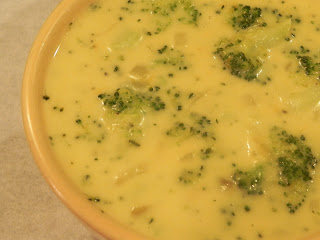 Broccoli Soup
1 head of broccoli
4 tablespoons olive oil
3 tablespoons flour
1/4 teaspoon of salt
1/4 teaspoon of pepper
2 cups of shredded cheddar cheese
2 cups of skim milk
Cut the broccoli flowerets into bite sized pieces. Place the broccoli and olive oil in a large pan, cover, and keep on medium heat (stirring occassionally) until the broccoli is soft, but not mushy. Then sprinkle the flour, salt, and pepper over the broccol and gently mix it until the flour is not dry. Over medium heat while stirring, alternate adding the cheese and the milk until both are mixed in. (Don't let mixture boil or it will curdle) 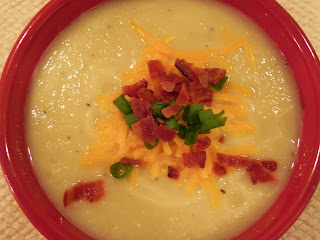 "Loaded" Cauliflower Soup
1 head of cauliflower
1 15oz. can of chicken broth
1/4 teaspoon of salt
1/4 teaspoon of pepper
Shredded cheddar cheese
2 slices of turkey bacon, cooked and crumbled
sliced green onion
Core and cut the cauliflower into pieces. Place cauliflower in a pan along with water and cook it until it is very soft. Drain the water and using a blender or food processor, puree it. Add the chicken broth, salt, and pepper and simmer 5 minutes. Pour into bowls and serve with the cheddar cheese, bacon crumbles, and sliced green onion on top. 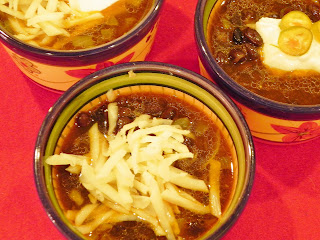 Black Bean Soup
2 tablespoons of olive oil
1 large onion, diced
1 clove of garlic, put through a press
1 can of black beans, drained and rinsed
2 15 oz. cans of beef broth
1 1/2 teaspoons chili powder
1 1/2 teaspoons cumin
1/8 teaspoon of salt
1/4 teaspoon of pepper
pepper jack cheese, monterey jack cheese, sour cream for garnish
Saute onion in olive oil until soft. Add garlic and saute for 30 seconds. Add the rest of the ingredients except for the garnishes. Bring to a boil, and then reduce heat and simmer for 10 minutes. Serve with the garnishes. (This soup can also be pureed)
Posted by Julie Yates at 10:27 PM No comments:

The last time Roy and I ate at St. Elmo's the weather was chilly. So, when the waiter asked us if we wanted soup, it seemed like a good idea. I asked him what kind it was. He said it was sort of like Campbell's Bean with Bacon.  Later, he confided that up until 1996, the soup they served actually was Campbell's Bean with Bacon!  Only in recent years has it been "homemade" - actually made by some guy that supplies soup to restaurants.  Making soup isn't hard at all, especially if canned beans are used and the steps below are followed. This post includes my copy cat version of St. Elmo's soup and some easy recipes to get anyone started.

If you can open a can of broth, you can make yummy soup!

The Formula for Easy Soup:


Sauté the carrots, celery, and onion in the olive oil on medium low heat until the tender.  Add the rest of the ingredients and bring to a boil.  Turn down the heat and let simmer about 10 minutes.
Not necessary but nice to do: Take two cups of the soup (beans and all) out of the pot and puree it in a food processor or blender, and then return it to the pot. 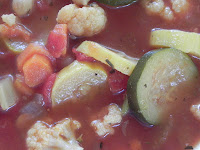 Sauté the carrots, celery, and onion in the olive oil on medium low heat until the tender.  Add the garlic and saute another 30 seconds.  Add the rest of the ingredients, bring to a boil, then turn down the heat and let the soup simmer for about 20 minutes.
* Click HERE for a pesto sauce recipe - great to stir in just before serving. 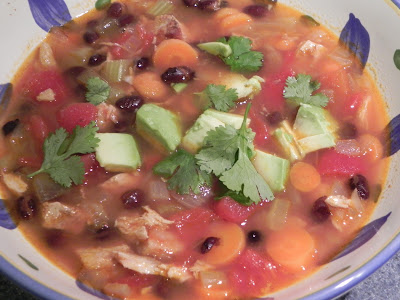 For serving: mall bunch of fresh cilantro and ripe avocado

Saute the carrots, celery, and onion   in the olive oil over medium low heat until they are tender. Add the rest of the ingredients, bring to a boil, then turn down the heat and simmer for 10 minutes. Serve with chopped fresh cilantro and chopped avocado.

Posted by Julie Yates at 7:42 PM No comments:

Jewels in a Jar -So Easy Refrigerator "Pickles" 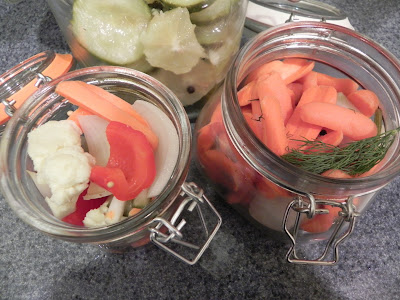 ﻿         ﻿                                                                                    ﻿
Several months ago, I picked up a cookbook, Simple Fresh Southern by Matt and Ted Lee, at a Borders going out of business sale.  They had a whole chapter on "fresh" pickles and sang their praises about how fabulous they are to put out as an appetizer or to serve as a side dish. They had some pretty interesting combos such as grapes with rosemary and cucumbers with lemon.  A few weeks later, I took the girls up to little town about an hour north of us where an old school friend of Jenn's, Brittany, was in beauty school.  She needed to get some "practicum" hours on real human heads and the price was right, so away we went.  While I was waiting, I thumbed through a bunch of magazines.  In one, decorators sounded off on how they entertain.  Fruit and vegetable pickles were mentioned as a way to adorn tables like "jewels in jar".  I decided to give it a try.  I had always wanted to make giardiniera, Italian style pickled vegetables, but all the recipes I ever looked at involved boiling the ingredients first and sealing them in jars. Too much work!  I decided to try to make it Lee brother style, and the results were great!  It lasts in the refrigerator forever (even after three weeks, the vegetables were crisp and crunchy) and it is so much cheaper to make it rather than buy it at the store in a jar.  I have used it as part of a tapas spread, in an antipasto platter, in New Orleans muffuletta sandwiches, and it really kicks it up as part of an Italian salad.  But what is really great is how quick and easy it is to make!  The recipe follows the pictures below. 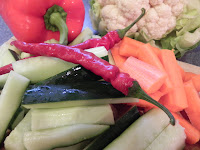 1/4 head of cauliflower
1 small white onion
2 large carrots
1 large red pepper
1 large cucumber
2 1/2 cups white vinegar
1 teaspoon sugar or sugar substitute
1 1/2 teaspoons whole mustard seeds
1 teaspoon whole celery seeds
1/2 teaspoon salt
1 small bit of "heat" - a small seeded jalapeno, dried hot red, or red flakes of pepper
Cut the cauliflower in bite size pieces. Peel carrots, slice in half lengthwise, then half lengthwise again, and cut each piece into thirds. Core and seed the red pepper and cut it into large square like pieces. Cut the cucumber lengthwise, then in half lengthwise again. Scoop out the seeds and cut each piece into thirds. Peel the onion and cut it into eighths.
Place the vegetables in a bowl and gently mix them up. Either leave them in the bowl or put the vegetable mixture into glass jars.

Put the rest of the ingredients in a sauce pan and heat to a boil.

Pour the vinegar mixture over the vegetables a bit at a time, let them cool a few minutes, and them store them in the refrigerator.