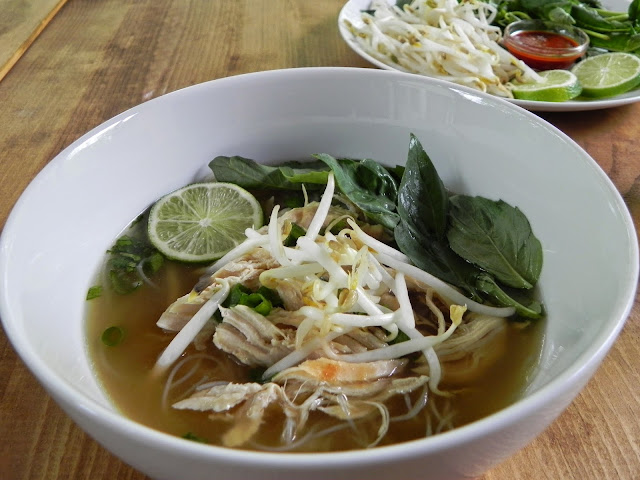 In past posts, I've written about my fun, fun friend Kim and my efforts to come close to duplicating her wonderful Vietnamese food HERE and HERE. Although she now lives in another part of the country we keep in touch through an occasional text or email. I had the chance to contact her a few days ago with a question about some photos she had taken for the organization we both had volunteered for. While I was looking over old files, I found this picture of Kim and the honorable mayor of our city, taken at a charity golf outing. Before that day, I didn't know her very well, but by the end of it I realized that she was a ball of fire with energy that never ran out. When I got to the event, I noticed Kim had added her own sense of style to the frumpy t-shirts all the other volunteers were wearing. She had turned hers into a v-neck, added a wide belt, and brought the ensemble to a whole new level with the addition of boots. She had commandeered a golf cart and said, "Are you here to help take photos? Well, hop in!" Then she took me all over the golf course. At one point we almost flipped the cart when we drove into a sand trap. She got us out safely however -  while she was roaring with laughter!  Kim introduced me to the deliciousness of Pho, the soup that is traditionally served as breakfast in Vietnam. Done right, the secret is the fabulous broth that is cooked for hours. I can't even begin to know how to truly make authentic broth for pho, but the recipe for my fake version posted here satisfies my craving. It's quick, easy, and light. Everyone can garnish it individually to fit their own tastes, so it's a fun and different kind of family meal. I've also included a sauce recipe from Saveur magazine that is great to dip the chicken in as you are enjoying the soup.

Ingredients and Directions for Four Large Bowls of Pho 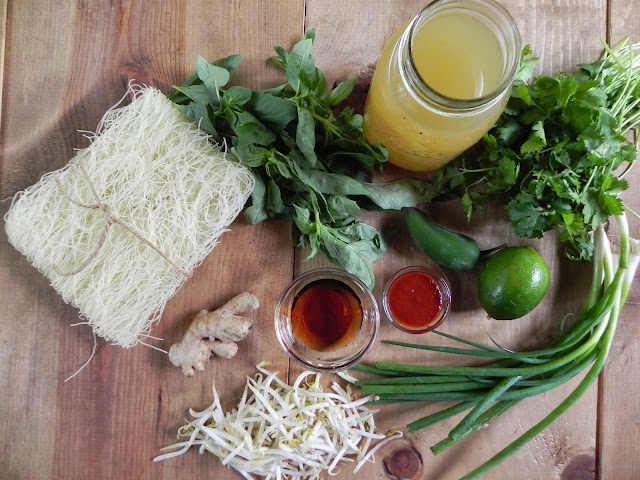 
Put the chicken pieces in a soup pot along with  the chicken broth, 1 tablespoon fish sauce and 2 thumb sized pieces of fresh peeled ginger. Bring to a boil and then turn the heat down to medium low and allow the soup to simmer for 20 minutes.

While the chicken is cooking, prepare dipping sauce, rice noodles, and garnish platter. To make the sauce whisk the 1/4 cup fish sauce, lime juice, and pinch pepper together in a small bowl. Float the jalapeno pepper slices on top of the sauce mixture. For the noodles, rinse them under running water and then drop them into a pot of boiling water and cook for about 5 minutes. When done the noodles should be tender but still have a bite to them. Drain the noodles and set aside. 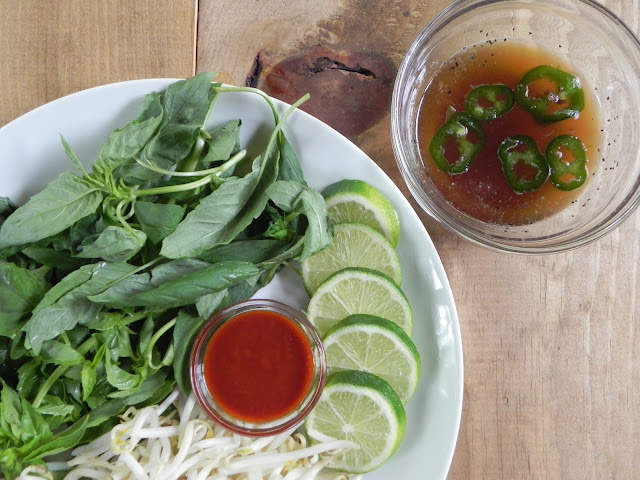 On a platter arrange the basil, bean sprouts, slices of lime, and the tablespoon of  sriracha hot sauce.

When the broth mixture is done cooking, remove the chicken. Slice  the chicken into bite sized pieces, and set aside.  Remove the ginger pieces from the broth and discard.

Now follow this order to build a yummy bowl of quick faux pho: 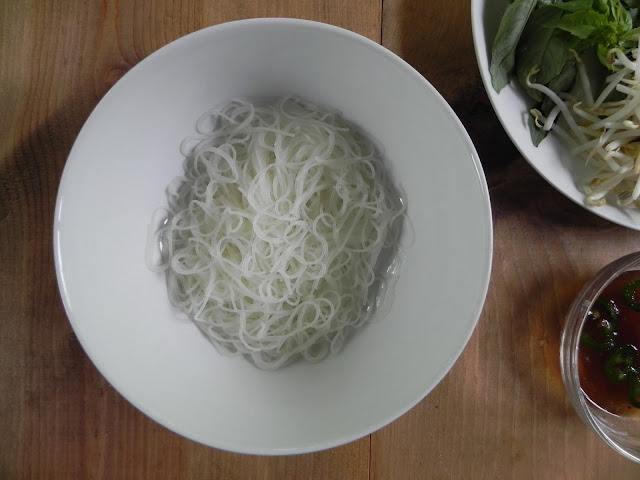 First, put 1/2 cup of cooked rice noodle in each bowl. 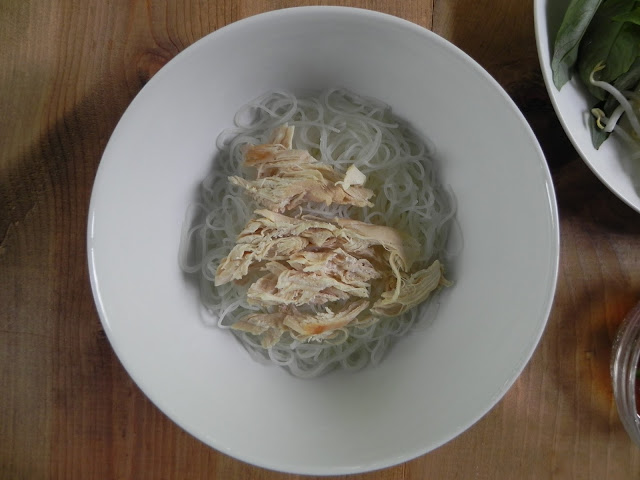 Divide the chicken pieces up evenly between the four bowls and lay it on top of the noodles. 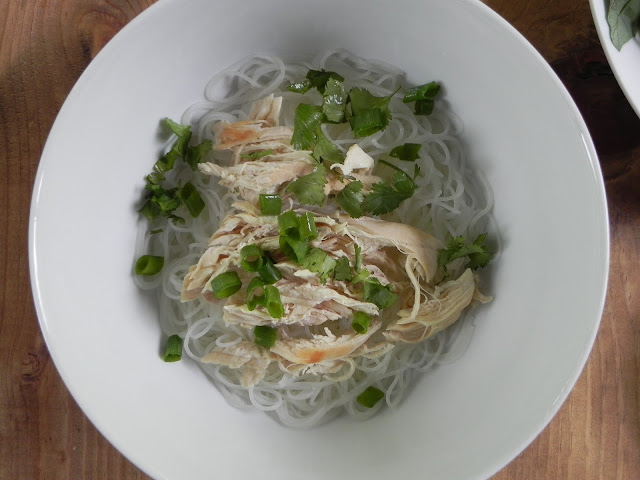 Sprinkle two of the sliced green onions and 1 tablespoon of the chopped cilantro in each bowl. 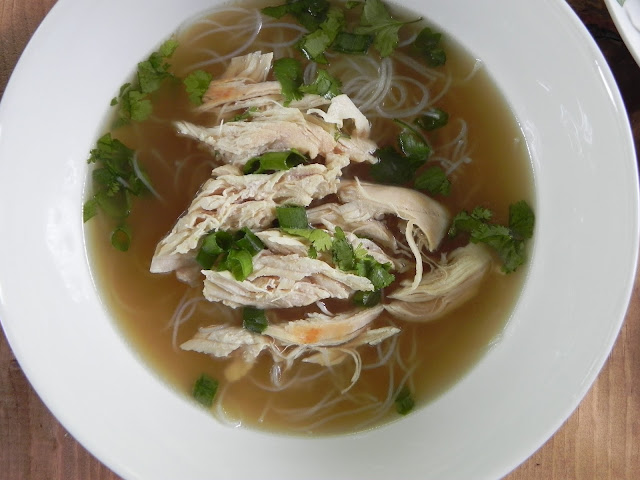 Evenly pour the broth over the contents of each bowl. 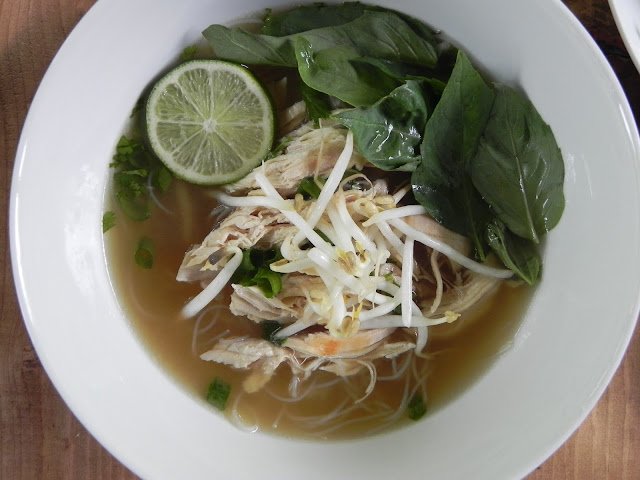 Add the garnishes (add more garnishes to the bowl as needed - a bit at a time to keep them crunchy) and dip chicken in the fish/lime sauce as the soup is eaten. 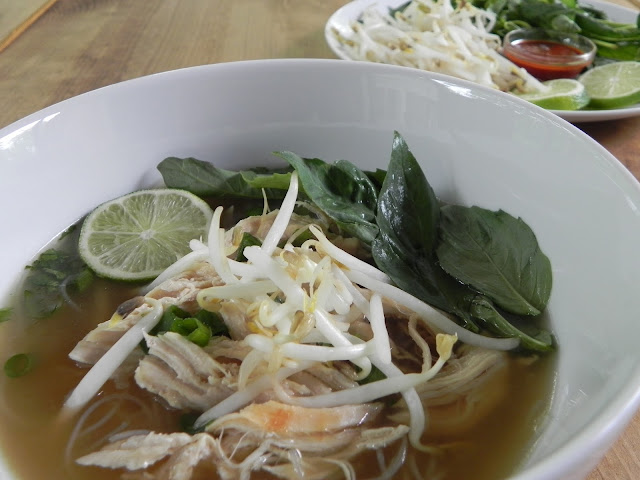