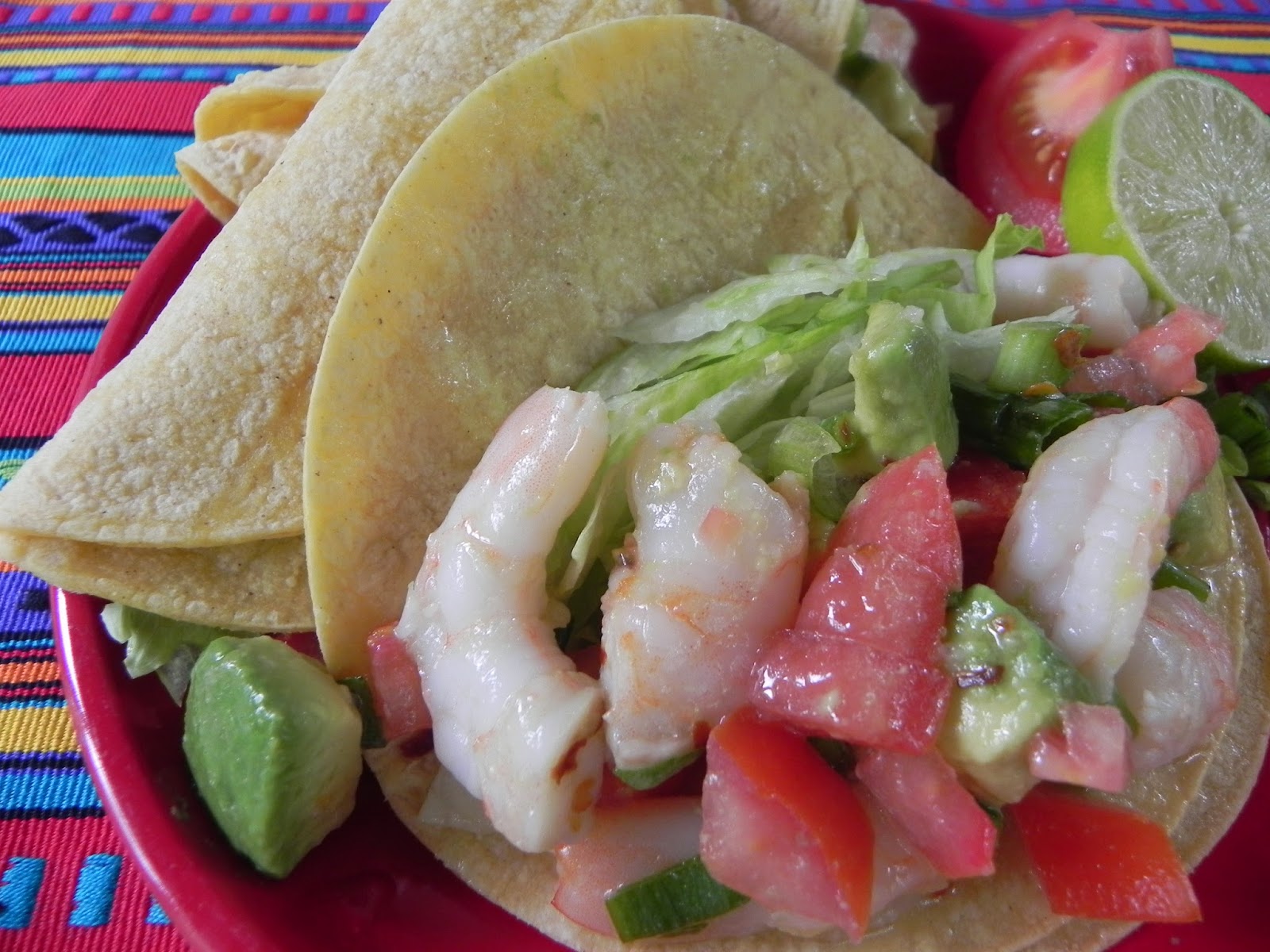 It doesn't get much easier ( or tastier) than this!  I have found that "cheating" by using frozen precooked shrimp allows me to whip up a meal in about 15 minutes.  The shrimp tacos here are so quick to make but they are so yummy.  They came about one dinner time when the only protein I had in the house was a bag of frozen shrimp. I was lucky enough to have an avocado and a lime as well as a tomato.  I had just gotten back from California after visiting Jenn and I was dreaming of the shrimp ceviche we had eaten out of a paper cup in one of the many fish taco joints near her apartment. The shrimp mixture in these tacos tastes a lot like that; the lime makes the precooked shrimp tastes fresh. With the addition of a corn tortilla, avocado, and tomato - it's a winner! 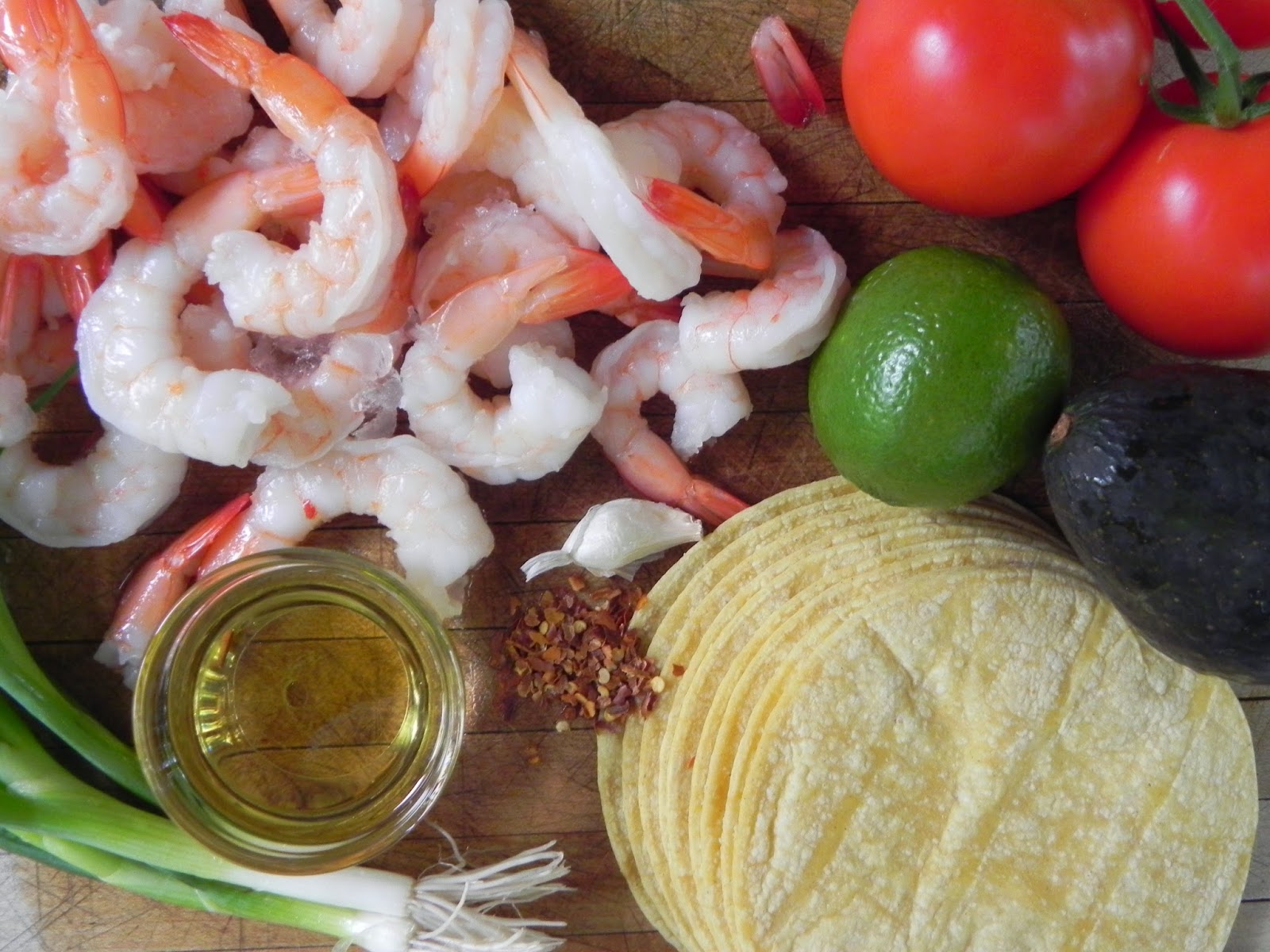 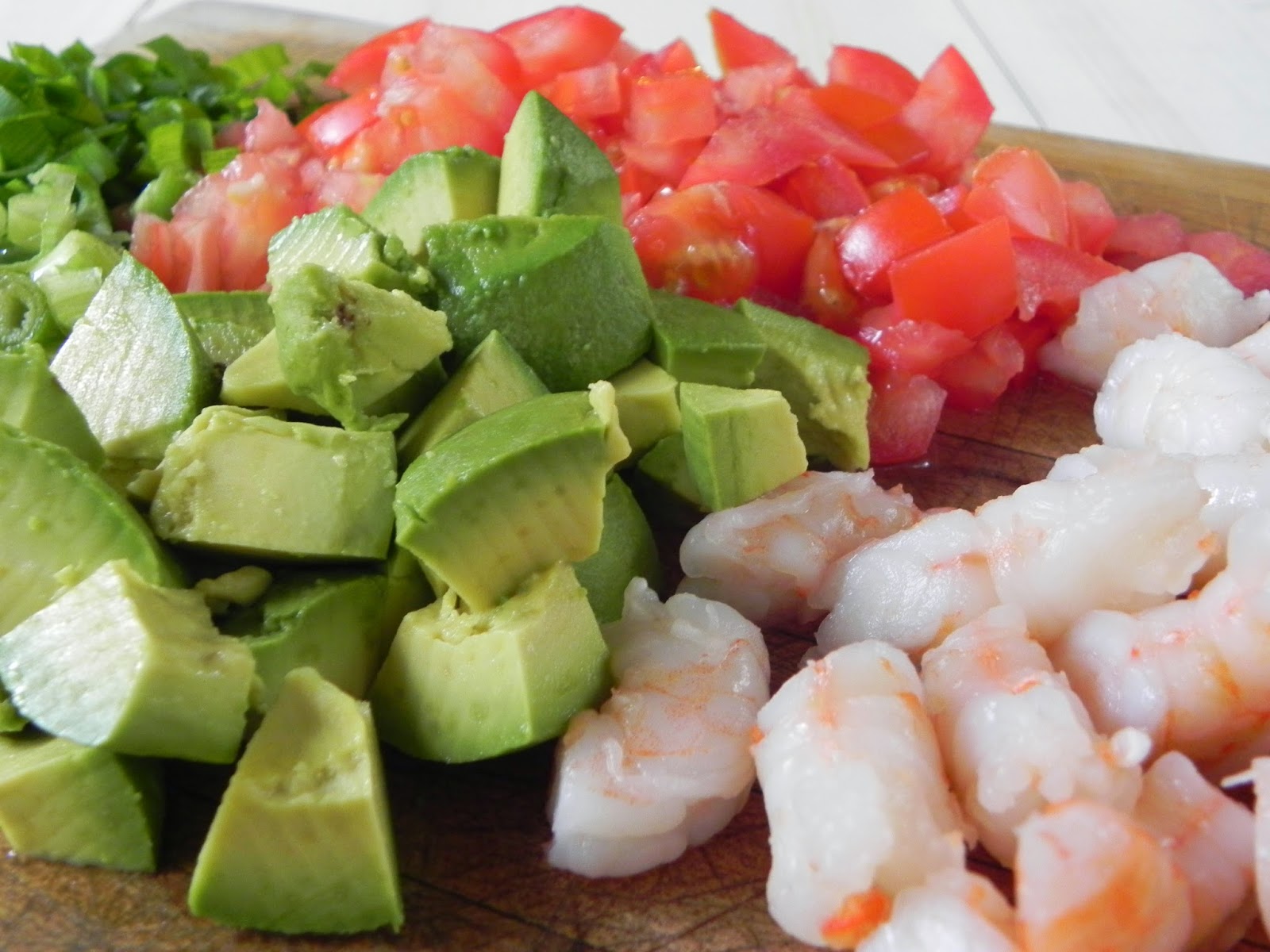 Put the shrimp in a bowl of cold water to thaw while you are preparing the rest of the ingredients. Peel the avocado, discard the seed, and dice it into chunks. Chop the tomatoes. Slice only the stems of the green onions.  Then drain the shrimp and pat it dry with paper towels. Place the shrimp, avocado, tomatoes, and green onions into a mixing bowl. 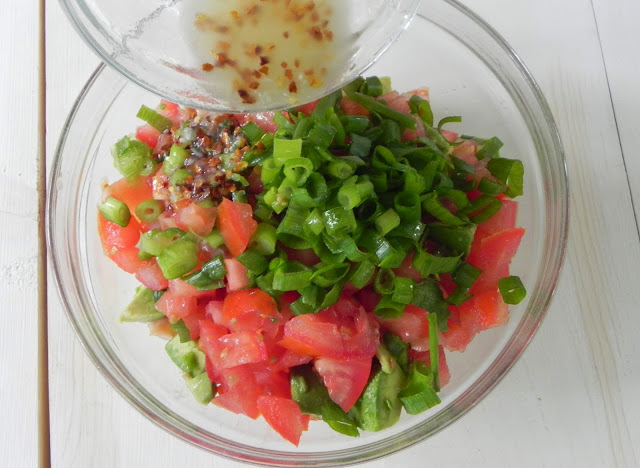 Peel the garlic clove and put it through a garlic press. Juice one of the limes so there is three tablespoons of juice.  In a small bowl, whisk together the pressed garlic, olive oil, lime juice, and crushed red pepper flakes.  Pour the mixture over the ingredients in the mixing bowl. 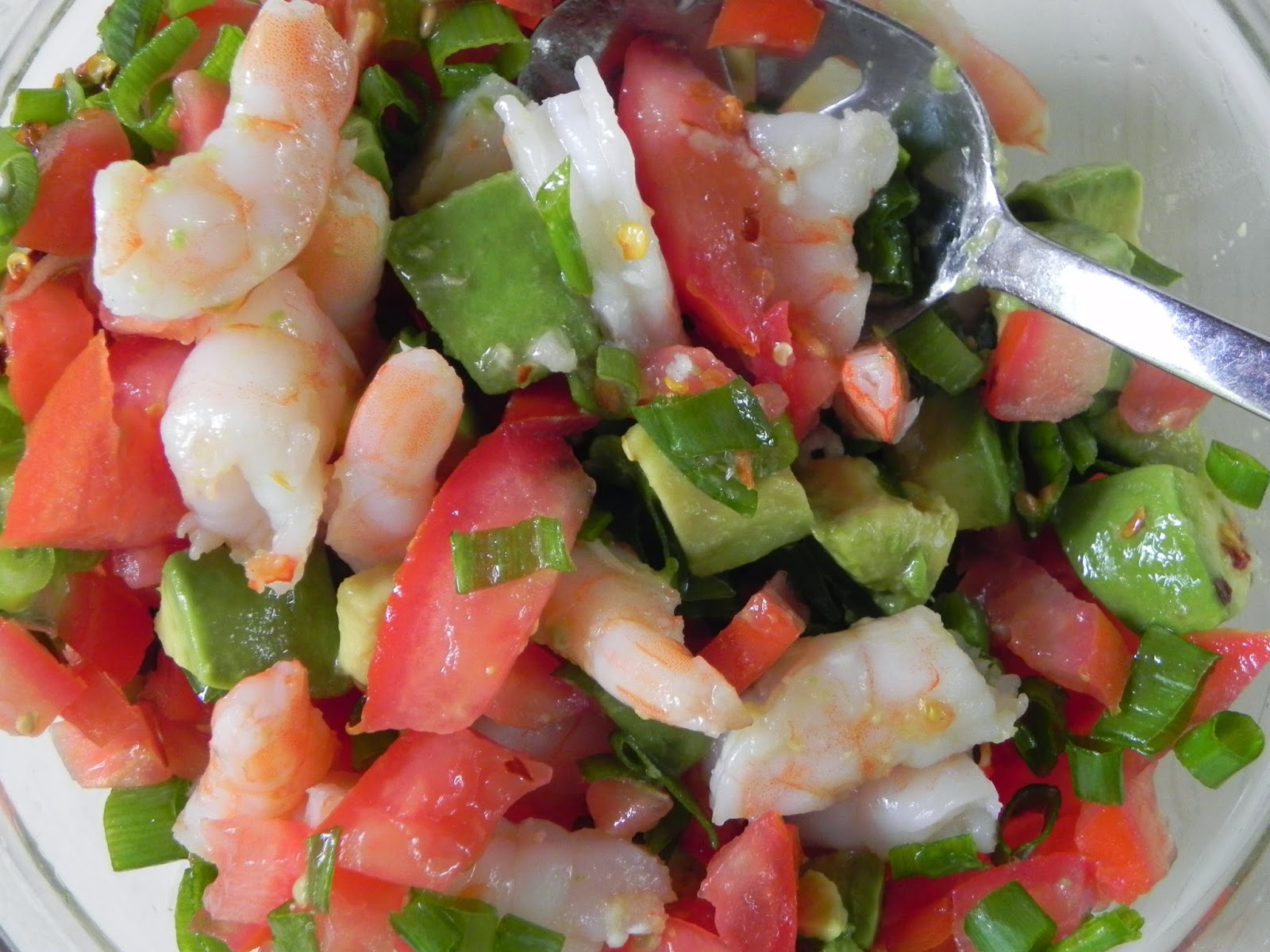 Gently toss. Warm the corn tortillas up by wrapping them in paper towels and microwaving them for 30 seconds. Or, wrap them in foil and heat them in a 350 oven for 5 to 10 minutes. 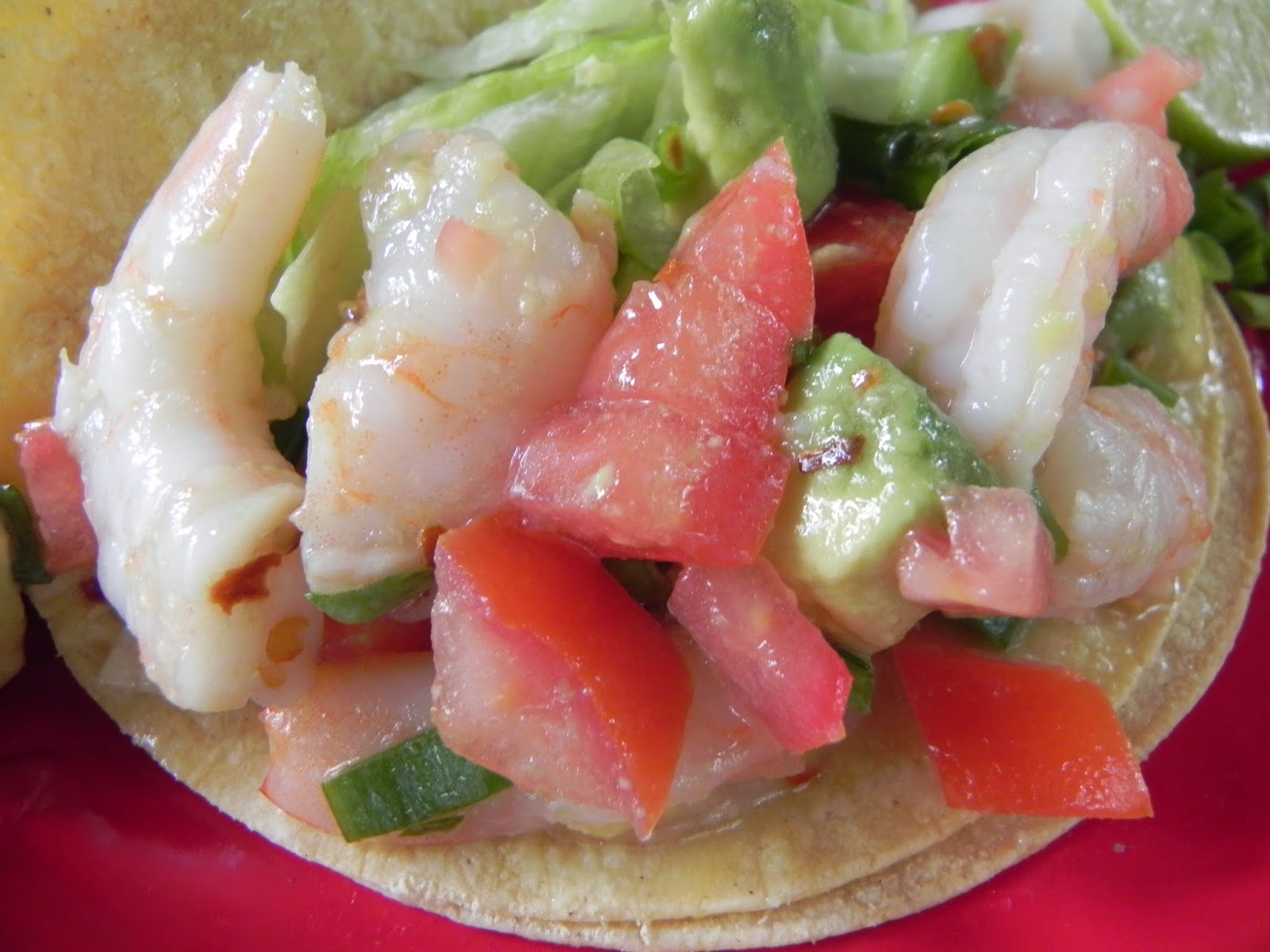 Assemble by using two corn tortillas per serving. Put 1/4 cup of the shredded lettuce on each double tortilla and divide the shrimp mixture up evenly among them. Serve with lime slices.